Oh, What A Week It Has Been!

The weather here continued to be both strange and unpredictable.   Tuesday started out rainy, followed by several hour of sun and then several hours of rain.  It has been rainy and cool for most of the week and although the sun is shining now, rain is supposed to return at the beginning of the week.  Normally May is very warm and it is a time when the beaches begin to get crowded.  That is not to be the case this year.

We returned from Madrid on Saturday on the AVE and as soon as we set Judy and Gerry up in the guest room we paid a visit to the Central Market.  Around 3:30 we made our way to La Comisaria where we had a very lovely lunch.  For the first time ever, we sat upstairs and discovered that the TV camera that we always see downstairs is used to televise the chef’s activity to a TV monitor upstairs.  The rest of the afternoon was very low key and we had a light dinner at home and we headed to bed kind of early.

Sunday was my birthday and we celebrated the event at Carosel.  The gathering was small since many of my magic friends were busy performing at First Communion parties.  November and May are the months of greatest activity and so magicians try and take maximum advantage of that fact.  It is not uncommon to book two or three performances on the same day.  Pepe and Brian joined us for the event and the six of us enjoyed a spectacular meal. Jordi had prepared an arroz con bogavante for us and the lobster was perfectly cooked.  Gerry had a prime steak since he is not a big fan of shellfish.  The good news is that we were all feeling happy when the meal ended with a celebratory bottle of champagne.

Monday was a time to do some sightseeing and we made our way to the City of Arts and Sciences to take a look at the stunning architecture that is on display there on a daily basis.  From there we walked to Gulliver’s Park that is always filled with children climbing up and sliding down the giant Gulliver that just about fills the interior of the park.  At lunchtime we headed on over to Mercat Bar where we sampled seven our eight different tapas.  We took a cab back home and in the late afternoon Judy and Gerry packed their bags in readiness for their trip to Avignon on Tuesday morning.

We were all up early on Tuesday and at 7:30 AM Judy, Gerry and I made our way to the bakery so that they could pick up some sustenance for their rather long train trip.  At 7:45 they hailed a cab and they were off to the railroad station.  Susan and I took it rather slowly on Tuesday and we did the same on Wednesday.

Thursday we decided that we would try out a new restaurant and for that reason we walked to a restaurant that is called Asador La Vid whose specialty is beef.  It is owned by the father of one of the young magicians of the CIVAC and since our friend, Leandro, is no longer in business we were on the lookout for a place to have steak.  Our walk lasted no more than fifteen minutes and the restaurant was nearly empty when we entered.  That would change very quickly.

When you enter the restaurant you first pass by the bar and then a rather extensive bodega with some two hundred bottles of wine.  There are two sections to the dining room and the kitchen, which is rather large by Spanish standards, is visible from both parts of the dining room.  The table is set with cloth napkins and tablecloths.

We ordered the menu of the day, which consisted of four different appetizers, steak, dessert, a beverage and coffee.  They started us off with a plate of tender Iberian ham, followed by a tomato and tuna salad.  Next came a pair of croquetas and our final appetizer was grilled squid.  When our steak came we were rather taken aback because it was enormous.  It had been cut off the bone and sliced and it filled the entire plate.  The waiter disappeared and returned with a plate of fries and pimientos de Padrón.  We tried our best, but we were unable to finish the steak.  However, we did have room for dessert, which was a plate of fresh fruit and other goodies.  We finished our meal with a cup of coffee and deemed our bill for 66 Euros as rather reasonable for our experience.

Thursday evening the veteranos met at Jerito’s house and we chatted about this and that.  The discussion was lively and lasted until 9:45.  When we left we headed to Carosel where we would celebrate Paquito’s birthday.  His actual birthday is at the beginning of the month, but this was the first time when we were all available to help him celebrate.  After several appetizers out came a plate of grilled vegetables and, you guessed it, sliced steak.  I picked at the appetizers and the main dish because, to be honest, I was still stuffed from lunch.

Friday was uneventful.  We did some shopping at the Central Market and Susan made a killer mussel dish for lunch.  Since it rained off and on the day way most conducive for curling up with a good book and along with several episodes of Bones that was the our activity for the rest of the day.

This morning we got a phone call from Jordi asking if Susan could come by the MuVIM to take some pictures.  Today is Museum Day in Valencia when every museum offers free admission and Jordi has scheduled a number of activities at the restaurant both today and tomorrow.  Tomorrow there is a food drive to benefit an organization called Caridad De Valencia and there will be music and entertainment for both old and young.  I have volunteered to do balloons for the kids.  They are heart shaped smiley balloons that I attach to a plastic holder so that the little ones can hold on to them.  I have no idea how many kids there will be tomorrow, but I think I have enough for those who show up.

We ran a few errands and then returned to the MuVIM for lunch.  We had a corn soup, a tomato salad, a little fried fish and some ribs.  Fresh apricots with a chocolate foam were our dessert.  We got back home at 3:30 and I woke up from my nap about thirty minutes ago to write this blog entry. 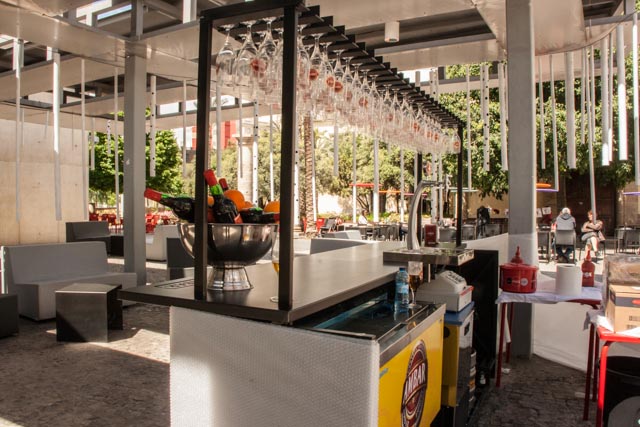 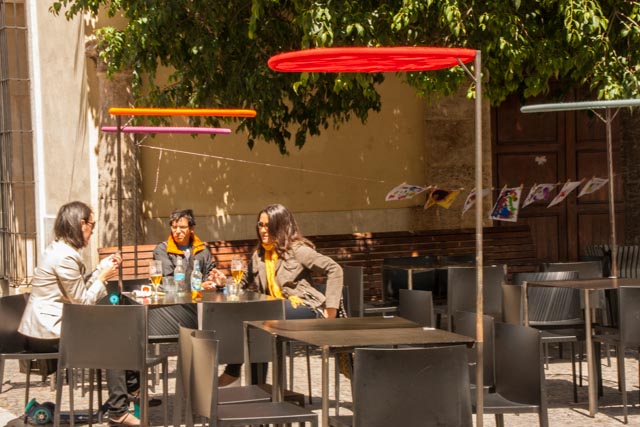 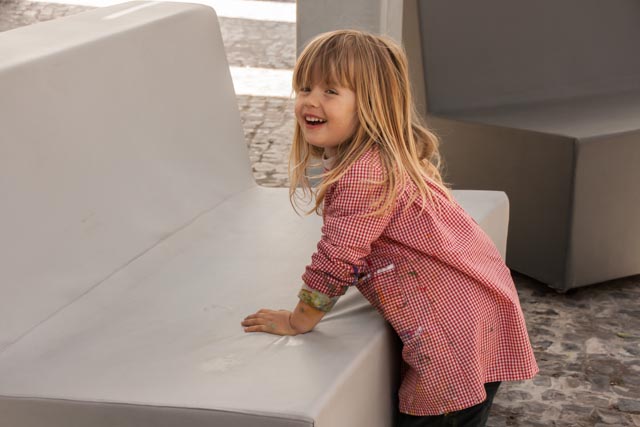 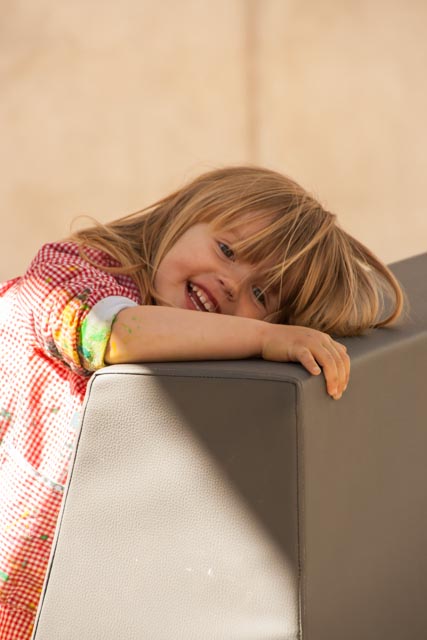 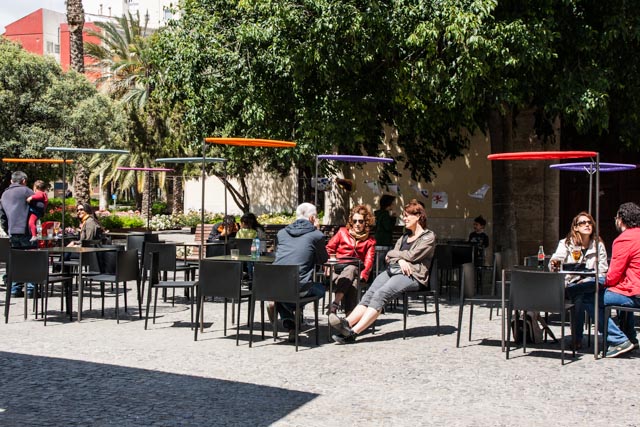 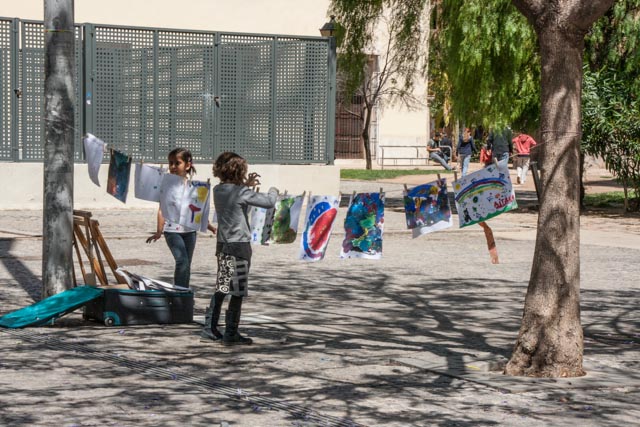 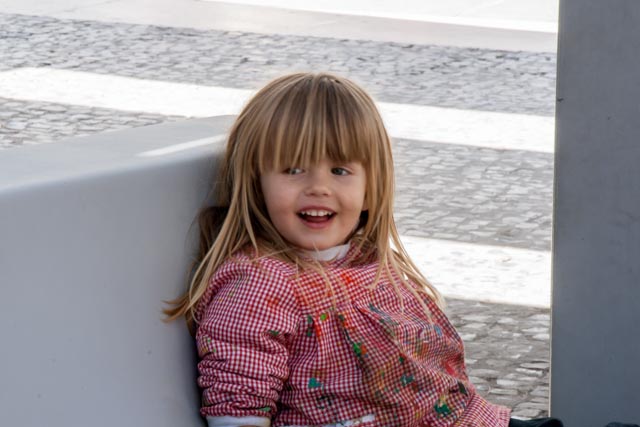 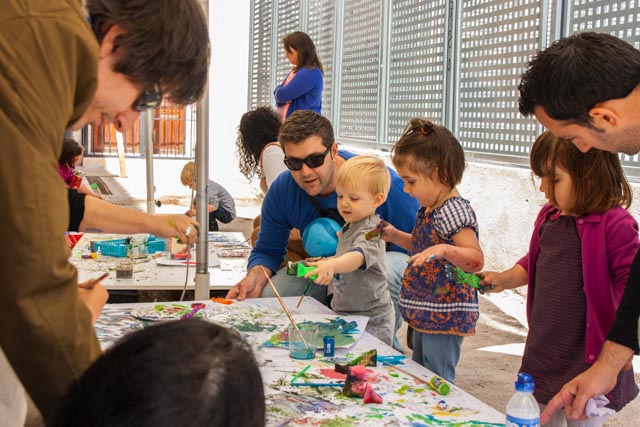 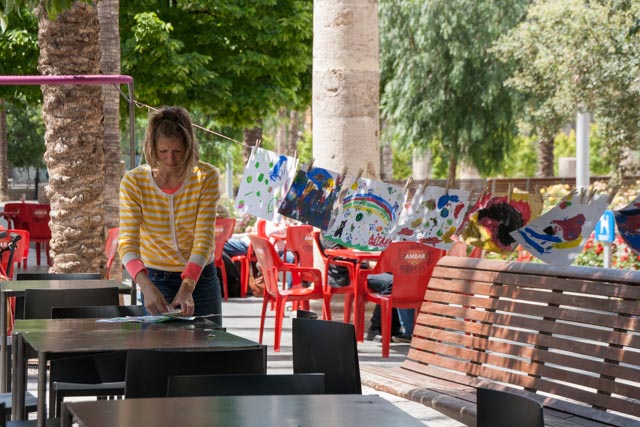 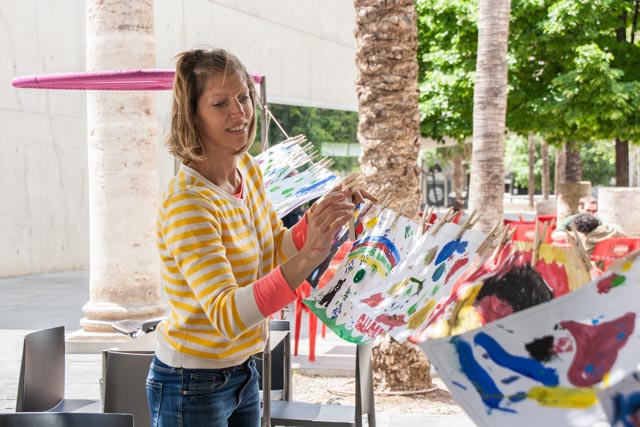 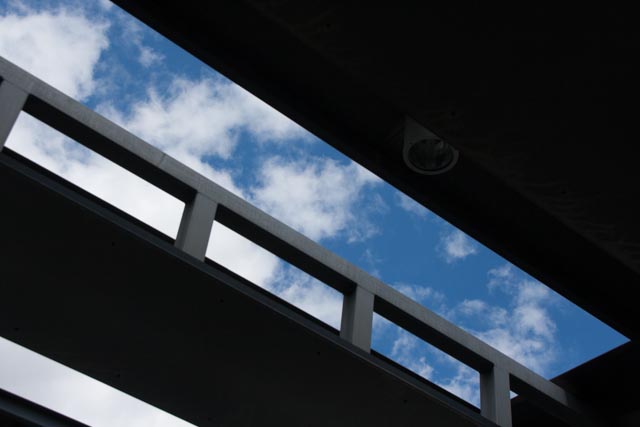 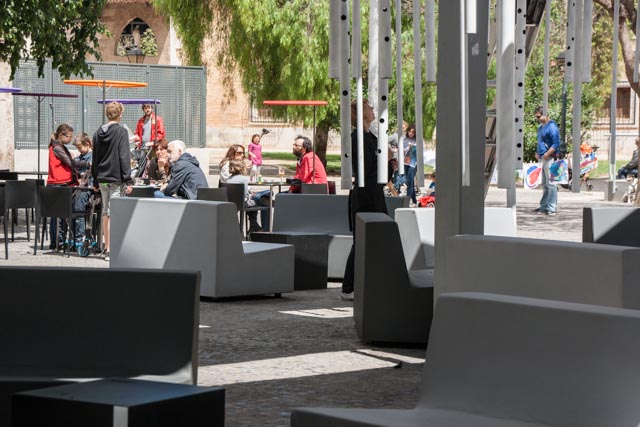 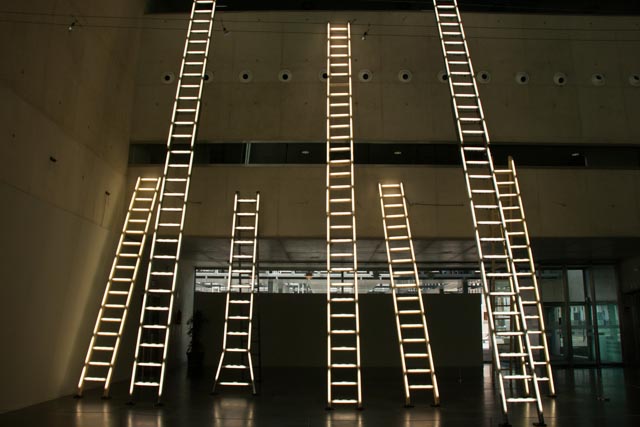 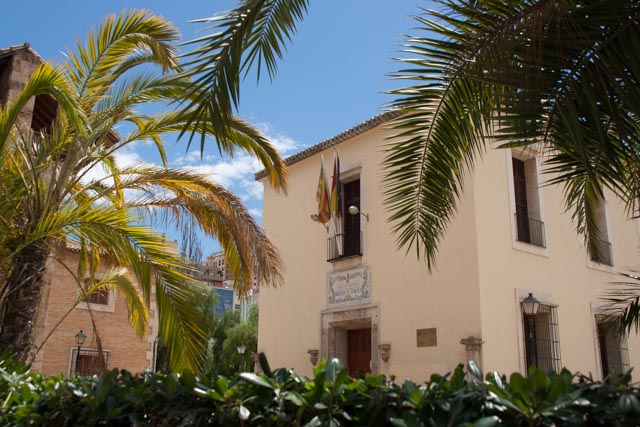 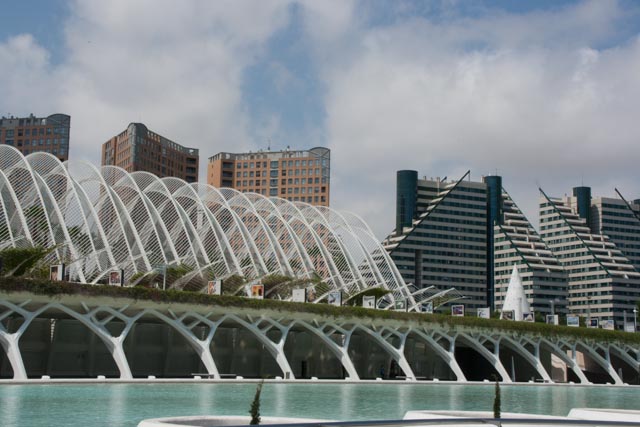 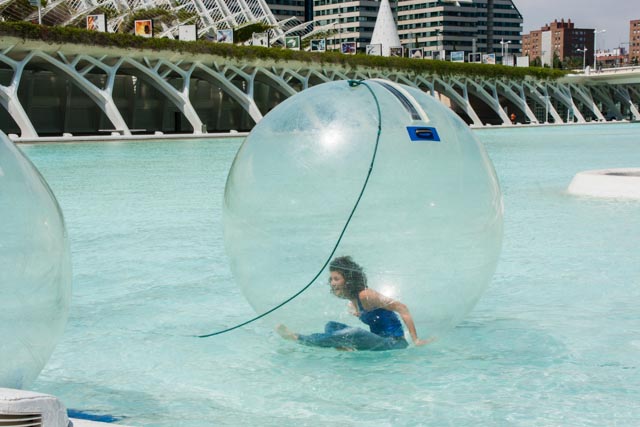 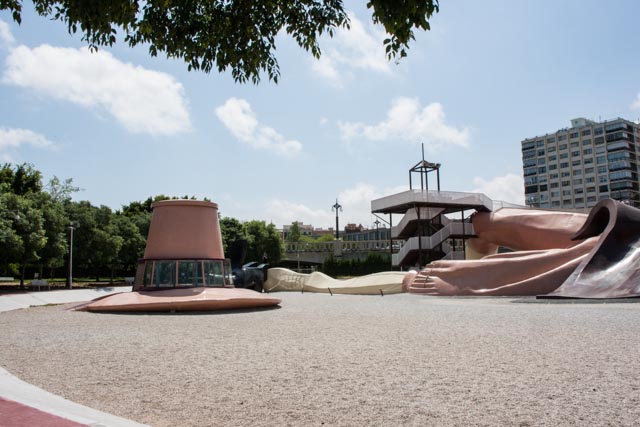 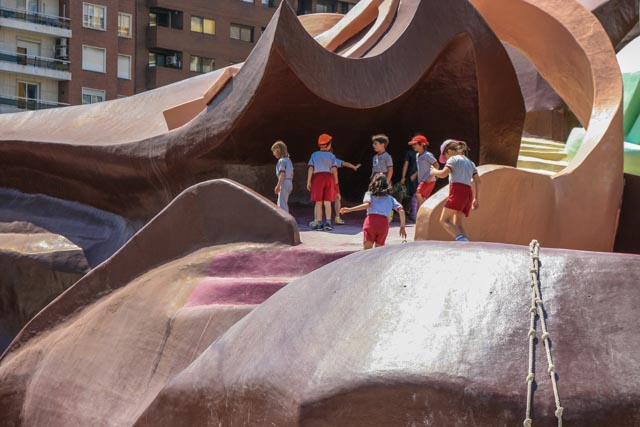 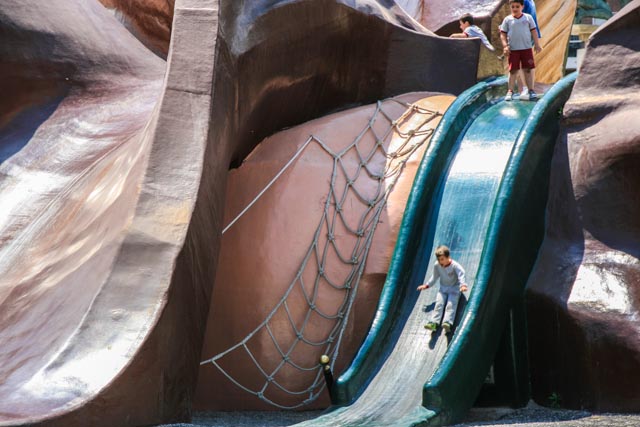 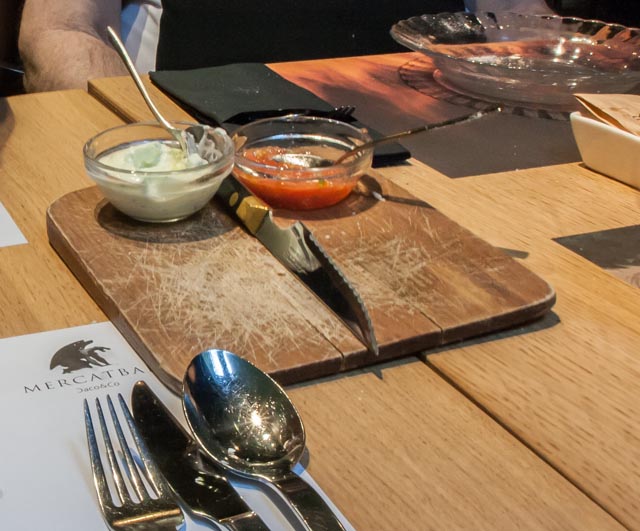 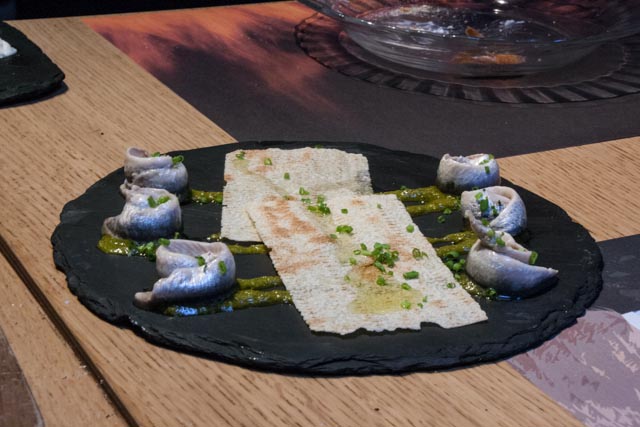 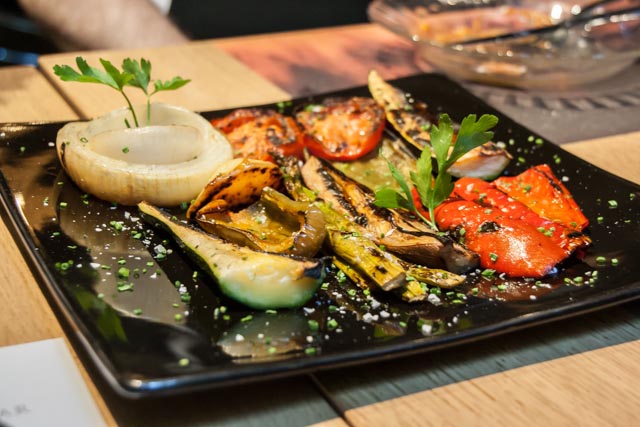