When It Rains It Pours!

When it rains it pours.  Requests from Magic Agora had slowed down somewhat, but as the date approaches for the World Magic Congress that is called FISM the requests have increased.  There will be a number of promos shown at this convention highlighting Magic Agora’s first offerings and I spent most of Tuesday translating the promos into English.  I needed to translate the text that will appear on the screen and the voiceover behind it.  I managed to finish the translation yesterday afternoon and today I spent two hours in a recording studio doing the voiceovers.  I discovered that you cannot air condition a soundproof booth because it will pick up the sound of the air conditioner.  Did I mention that the outside temperature was in the high 90’s.  Oh well, that’s showbiz.

Monday we had lunch at El Molinón because we were in need of a gazpacho fix.  We also had the sliced steak that comes with potatoes and pimientos de Padrón.  We were stuffed when we left.  We took the rest of the afternoon slow and easy and around 7:30 I began to get ready for my trip to the CIVAC.

There was a last minute lecture scheduled.  An Argentinean magician, Diego Minevitz, was in town to deliver a lecture dealing with fakirism and escapes.  Fakirism is a close relative of geek magic in that it involves such feats as walking on broken glass or doing effects with dangerous objects.  The presentations and the explanations were enlightening, but this branch of magic is really not my cup of tea.  I had a sandwich and beer with the guys during the break and then headed home before the second part of the lecture began.

Tuesday we grabbed a quick lunch at Las Torres because we needed to be home when Valero delivered our boxes for the move.  We had a salad and a plate of arroz a la cubana.  Susan had a tinto de verano and I managed to get the last Newcastle beer that Paco had.  At 4:00 PM, as promised, the Valero driver delivered some twenty small boxes that we will pack our belongings in.  Susan put some of the boxes together and we began the task.  We took a break at 7:30 to go to the movies.

We saw a fascinating documentary made by German director, Werner Herzog.  It is called The Cave of Lost Dreams and it deals with a cave discovered in France several years ago that contains cave drawings form some 30,000 years ago.  We saw the movie in 3D and that most certainly added to the experience.  It was a fascinating film.

At 11:00 this morning we knocked on the door of what will be our new home and Alicia opened the door.  She walked us through the house and showed us how to operate some of the appliances and also showed us where she had left thinks like towels and linens, as well as all the dishes, silverware, pots and pans.  It turns out that we liked the place even more than our first visit.  Details and photos will follow in a later blog post.

We then made our way to ONO, which is one of the local cable companies.  We contracted for a package that includes telephone, Internet and cable.  The download speed of the Internet will clock at 50 megabytes, which is obscenely fast.  Our cable package includes 60 channels.  Our cost will be 50 Euros a month.  Not a bad deal.  On our way back home we stopped off at A Nou and had lunch.  Today we passed on the rice entrée and chose a meatball stew instead.  It was a great choice.

That’s today’s update.  I am not sure when I will post next given all that needs to happen by Monday at 8:15 when the movers show up. 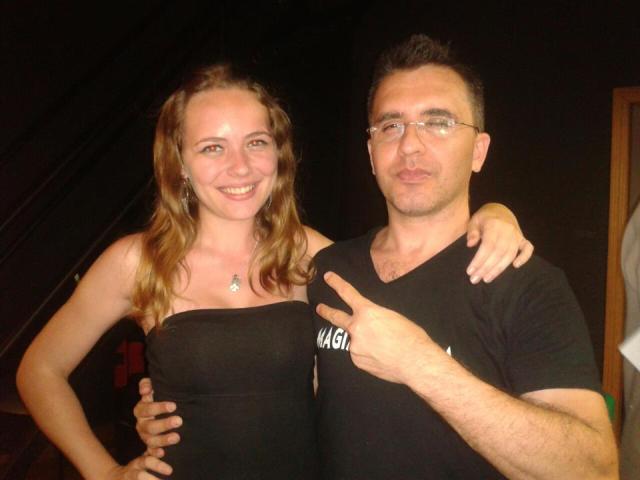