Last night the doctor in charge of my physical therapy poked and probed my knee and told me that the twenty-five physical therapy sessions had brought about great improvement in the condition of my knee and that further progress would depend upon my resuming my normal exercise patterns and making use of a stationary bicycle, the treadmill and, of course, just plain walking.  I should avoid exercises that stress the knee and I should adjust weights accordingly when resuming exercise.  That was the same message conveyed by the traumatologist this morning.  He said the it would take another month and a half of solid exercise to strengthen and improve the knee.  Will things return to their pre-trauma state?  The answer is a qualified maybe.  The loss of cartilage cannot be remedied and, in truth, has most probably been a slow process that has been going on for a while.  In terms of the accumulation of fluid and the slight fracture that should be completely resolved in the next forty-five days.

Yesterday we caught up with Jordi to make some tentative plans for my birthday party.  I basically gave him a dollar amount per person and then left everything up to him.  As we approached the restaurant I saw some familiar faces at a patio table.  Pepe was there, along with Salva and Argentine magician, Iñaki Zabaleta, who had just finished taping his course for Magic Agora.  We chatted for a brief bit and then Susan and I seated ourselves at an indoor table.  We studied the main course options and decided on a fideuá made with seafood.  We also chose a white wine from Rueda that was just perfect.

Yesterday’s offerings on the appetizer board included a variety of breads, a cream of corn soup, a false croqueta de mejillón, which was, in essence, a deconstructed croqueta with the mussel on the bottom covered with a layer of béchamel and everything topped with the breading that is essential to every croqueta.  There were also some breaded and fried strips of presa ibérica and a triangular piece of cod that had been prepared with oranges and other secret herbs and spices.  The fideuá was quite large and although we tried our best we could not finish it.  Dessert was a crema de queso topped with strawberries.  Pepe and friends joined us at the end of the meal and while I had an orujo de hierbas my other four tablemates had a gin and tonic.  We were ushered out of the restaurant at 5:00 so that the personnel could rest before returning to get ready for the evening meal.

My appointment yesterday was at 5:50 so no sooner had I reached home than I pocketed my Metro pass and headed out to the clinic.  I was back home a little before 7:00 and we spent the rest of the evening reading and watching a couple of episodes od Antiques Road Show.  We were in bed by 11:30. 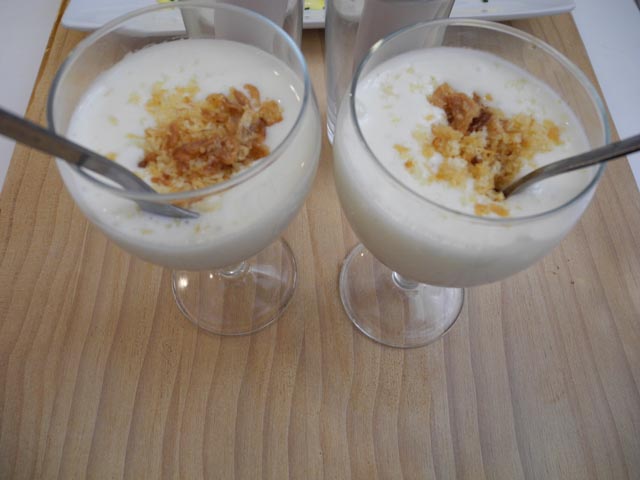 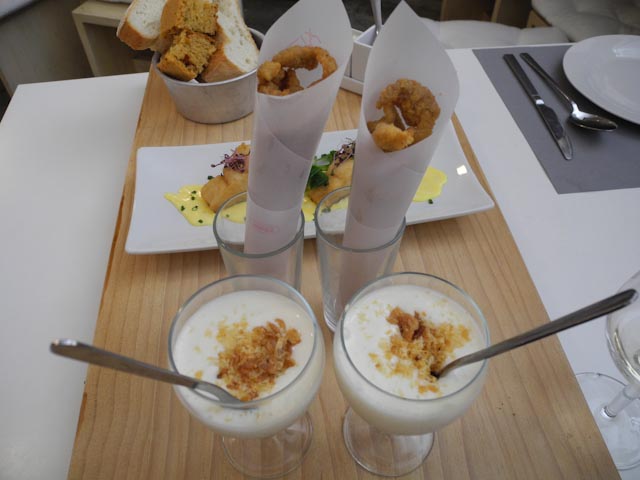