It appears that 9:00 AM is our wake up time now that we are retired.  I dress quickly and pay a visit to the bakery and get some breakfast pastry.  After breakfast we busy ourselves with a variety of computer tasks and we then do our exercise routine with the rubber resistance.  We then shower and get dressed and head out to Seu-Xerea where we have been invited to have lunch by Jordi Morera Siscar, who is the head chef. Here is a link to the restaurant http://www.seuxerea.com/page/english/00-contents/contents-00.htm

Seu-Xerea was opened in 1996.  The food is described as Mediterranean-Asian fusion.  The space is decorated in bold Mediterranean colors and there is a smoking as well as a non-smoking section and the two areas are thankfully separated.  Today, Monday, the restaurant is trying an experiment at lunchtime.  Since the fish market at the Mercado Central is closed on Mondays, the menu of the day is puchero, as it is called in Valencia.  Some of you may know it as cocido madrilène.  If you have seen the series SPAIN…ON THE ROAD AGAIN with Mario Bitale you have seen Mario and Mark Bittman devouring what some consider to be the perfect hangover cure.  The truth is the puchero is a traditional dish that most probably can be found in many areas of Spain.

We walk in and we are soon greeted by Jordi and are promptly introduced to Stephen Anderson, who serves as the host and part of the ownership of the space.  Stephen is from London and is of British and Burmese extraction.  He is a former physics teacher who taught for a number of years at the American School in Valencia.  We are seated in the non-smoking section and our pre-luncheon drinks are quickly delivered.  Pepe arrives ten minutes later and we chat for a while as we snack on some home-made potato chips that are unlike any that I have ever tasted.

We begin our formal meal with a teaser of smoked salmon ensconced in a small piece of frisée.  Next comes a lovely little salad with lettuce, cherry tomatoes, edible flowers and pine nuts.  It is topped with rolled slices of rare roast beef. Our plates and silverware are cleared and the puchero arrives.

In a matter of minutes our table is covered with a casserole dish filled with broth and noodles.  This broth is what the puchero has been simmering in all morning.  Next comes a plate heaped with vegetables.  Some are familiar and others not.  I recognize the garbanzos, the potatoes, the thistles, and the summer squash.  There is another tuber on the plate that I do not recognize and there are pencas, as well.  Pencas is a member of the artichoke family and bears a resemblance to thistles, but I am hard pressed to find an English meaning for the word.  Along with the plate of vegetables, there is a plate filled to overflowing with meat.  There is chicken, lamb and pig’s trotters all in abundant quantities.  There are also stuffed cabbage rolls whose circumference is easily that of a silver dollar.

We all start with the soup and after that each one of us devises his or her own plan of attack.  We do our best, but we are not equal to the quantity of food that populated the two plates.  Dessert arrives and we are treated to migas de chocolate with what we are told will be a magical sauce.  At the moment there is a small glass with ice cubes sitting on the plate along with the bits of chocolate.  The pitcher with the magical sauce arrives and it is pored into the glass and the sauce in the glass begins to bubble and foam.  It almost looks like an octopus is emerging from the small glass.  The dessert, of course, is outstanding.

Jordi sits at our table while we are having coffee and we chat for a while.  Both Pepe and I do a little magic and Jordi confesses that he would like to do a magic night at the restaurant that would include a special menu with a magician doing some magic at each table and perhaps a parlour type presentation as well.  I am invited to perform the next time I am in Valencia.  It is an offer that I will seriously consider.  It is close to 4:00 when we finally leave the restaurant.

The rest of the day is devoted to digesting our meal.  Susan works on her photos and I catch up with my correspondence.  Around 9:30 we go out in search of ice cream and we take a bit of a walk.  When we come home, we read for a while and eventually make our way upstairs to the bedroom. 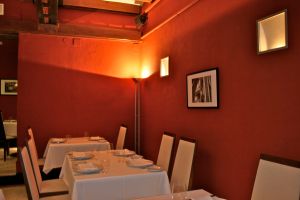 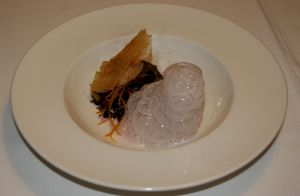 We discuss the possibility of a magic show.