Posted on October 2, 2009 by martykaplan

The morning was uneventful.  We did manage to get the dirty laundry over to the Laundromat soon after it opened.  We were told we could pick it up at 1:30, so I headed back home to begin packing for our trip to Madrid and La Rioja and Susan did some shopping.  After we picked up the laundry, we made a little lunch at home and finished our packing.

Our plan for the evening was to take a cooking class on tapa at Food and Fun, a recently opened cooking school, which is a five minute walk from the house.  Unfortunately, I was still recovering from a touch of traveler’s tummy, so discretion being the better part of valor, I though it best to skip the evening’s activity and rest up for tomorrow’s journey.  What follows is Susan’s account of her evening.  She has also posted a number of photos on Facebook.

Wednesday night found me at Valencia’s Food and Fun with 25 other fans of cooking and tapas.  The class was made up of an interesting collection of people, true Valencianos, three men from Italy, a couple of American women married to Spanish men who have been living there for 40 years, a woman from China and a number of people with whom I did not have the time to interact.

Our instructor was award winning Koldo Royo.  Food and Fun is a delightful cooking school that has well known chefs presenting courses on their specialties.  As a person who could live on tapas, I had no doubt about what course I wanted to take.  I was not disappointed.  The class was informative and indeed fun.  With 25 people getting to know each other, asking Chef Koldo questions and putting their tapas together there was a great deal of laughter and in true Spanish fashion a good deal of wine as well.  The Chef could have been a stand up comedian.  Amidst all the fun it was very hands on and I learned a great deal. Our menu for the evening was as follows:

Gulas con granada – a shot glass size tapas of tiny eels in vinaigrette on a bed of finely shredded lettuce, finely chopped tomato and topped with a sprinkle of seeds of pomegranate.

Merluza con salsa verde – fish baked in the oven then served in a sauce consisting primarily of tiny clams, parsley, and garlic

Dessert was very simple and just lovely.  Pomegranate seeds are placed in a wine glass and sprinkled with sugar.  Then a little red wine is added.   We all learned the easy way to get all the seed out of the pomegranate.  Cut it in half that tap around the sides strongly and the seed come falling out.

Unfortunately Marty was not feeling well and was not able to attend, so he or I can come to another class to make up the one he missed. I have my eyes on “Sopas, guisos y arroces tradicionales de nuestras abuelas” (Soups, stew and traditional rice dishes of our grandmothers.)   This call even includes a shopping trip to the Mercado Central.  I hope Marty will join me.  It was so much fun.

Tomorrow we head off to Madrid at 11:30 AM and we have theater seats for tomorrow’s performance of LA CASA DE BERNARDA ALBA. 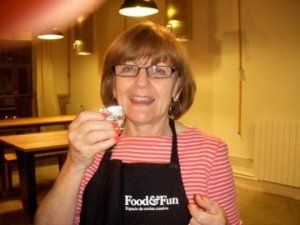