Posted on October 6, 2009 by martykaplan

I was still feeling the after effects of tourist tummy, but the good news was that I was feeling considerably better.  The walk to the train station was ten minutes at most and since we were forty five minutes away from departure time, we decided to wait in the Club Room.  Whereas the Club Room in Barcelona is modern and spacious, the Club Room in Valencia has more of a traditional feel to it and it is considerably smaller.  We treated ourselves to a cold drink and we lingered until our train was called and we were off on our Madrid adventure.

Our train rolled into Madrid a little after 3:00 PM.  We went directly form the station to our hotel – Hotel Suites Viena.  Hotel Suites Viena is a newer hotel located near the Plaza de España in a residential neighborhood.  The room is bright, large enough with a small sitting work area and a king size bed.  The bathroom is small.  There is also a Pullman kitchen with a fridge, microwave and stove top. If you wanted to cook for yourself, you could do so as they make pots and pans, dishes and silverware available upon request.  There is no room service, but a number of restaurants will deliver to your door.  It feels like a hotel designed for people who have business in Madrid and need a convenient place to stay.  It is opposite a school and that means that you are up at 9:00 when the commotion outside begins.

We had tickets that evening for García Lorca’s LA CASA DE BERNARDA ALBA, a play that I first read some fifty years ago and one that I have taught many times in my forty five year career.  It was being performed at a space for the arts called the Matadero and it stars two of Spain’s finest actresses, Nuria Espert as Bernarda and Rosa María Sardà.  Fortunately, we had bought the tickets on line before we left for Spain because when we went to the box office to exchange our vouchers, we discovered that Thursday night’s performance was sold out.

The Matadero is an amazing space.  It is one of the best examples of early 20th century commercial architecture.  In its initial incarnation it was a slaughter house and stock yards that occupied an area of close to 2 million square feet.  The various buildings occupy 284,000 square feet and as of today 59,000 square feet of building space have been converted for public use.  It is, in essence, a center for the arts, but arts in all senses of that word – books, painting, drawing, music, theater and design.  The theater is located in a building called Las Naves del Español.  When you enter the building you discover that you are in a large space that is shared by the bar and a performance space for intimate musical presentations.  If you make your way through the bar and turn to your left, you enter into the space occupied by the theater.  The theater is unique in that the audience is seated on both sides of the stage.  Instead of theater in the round, you are experiencing theater in the parallel. The theater is capable of being used in many different configurations, depending upon the type of work that is being presented.

The performance began at 8:30 and all aspects of the performance were outstanding.  The lighting, sound and costumes were as perfect as it can get.  All the performances were spot on.  The sight of 40 women mourners, all dressed in black, who fill the stage causes an impression that will last for a lifetime.  The play, written in three acts, was performed without an intermission.  The two hours seemed to fly by.  At the end the cast received three standing ovations and they truly deserved them.

A detail from one of the walls in the Club Room in the Valencia train station.

Susan enjoying a gin and tonic as we approach Madrid.

The entrance to an exhibition on clothing design 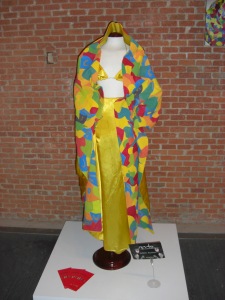 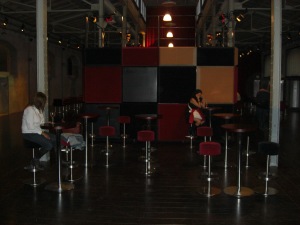 We made our way from the theater and hailed a cab.  We found a restaurant near the hotel that was one of the few still open and we treated ourselves to a “sandwich mixto” – basically a grilled ham and cheese sandwich – and we then made our way to our hotel room and called it a night.  I went to sleep a very happy man because I had finally realized one of my lifelong dreams – seeing LA ACASA DE BERNARDA ALBA performed in Spanish by an outstanding cast.