Hail, Hail The Gang’s All Here!

Yesterday we celebrated an early Thanksgiving due to the fact that on Wednesday we had to Granada for the Hocus Pocus Festival. Since we will not return until after Thanksgiving, before seemed a better option than after. There were fourteen of us around the table and they represented friendships that began anywhere from twenty years ago to two years ago. There were several other invitees who were unable to attend because Saturday was a workday for them.

The meal had all the traditional ingredients and there were a number of things to munch on before we got down to the real business of the day. We enjoyed chopped liver, mixed nuts, olives, and pickles, as well as ajo arriero, a dish made from potatoes and salt cod. There was a cranberry cocktail with a Prosecco base, as well as beer and wine. The meal ended with two homemade pies – pumpkin and pecan – thanks to the talents of Brian Oberle and a round of after dinner liqueurs. So who all was around the table beside Susan and myself?

Going counter-clockwise we start with Emma, Juanjo and Vilma. We met Vilma some five years ago when she was waitressing at a restaurant called El Molinón. Originally from Honduras Vilma had been living here in Valencia for a number of years. She wanted to learn English, so Susan offered her services. A friendship blossomed from those linguistic exchanges. Juanjo came upon the scene a bit later and the two were married in Honduras and celebrated here a month later with an outstanding celebration. Recently Juanjo has realized his lifelong ambition to become a pilot and now works for a firm that specialized in private flights for executives. Emma, the latest addition, turns one year old on December 20.

Next to Vilma is Paquita, Pepe’s mother, who lives in Pedreguer, a small town located in the province of Alicante. We have spent Christmas day with her and her family for the last five years. She prepares a traditional cocido and after that filling meal all the men gather around the TV and enjoy a siesta.

By now, you all must know Pepe. We met almost twenty years ago via an e-mail exchange. Magic was the link. Pepe at the time was very much involved in mentalism and had published a number of articles in very important publications. Our first project that was, in essence, an English translation of one of his effects was published in Genii magazine. I made my first trip to Pedreguer some nineteen summers ago when I was the guest of honor at a weekend session of La Cuchara Mágica. Pepe keeps himself quite busy these days between work, fun and an online Masters Degree that he is working on.

Next to Pepe are Carol and Joana, but you will have to look carefully to see Joana who is mostly blocked by the flowers. Carol is Jordi’s wife. Jordi is missing from the photo because he came late. We met Jordi in 2009 when he gave a class on various rice dishes at the nearby Food and Fun. The following Monday we visited with him at Seu Xerea, where he was working at the time. It was our first experience with cocido, and a memorable one at that. Jordi then went on to his own restaurant, Carosel, where we enjoyed many a fine meal. Carol frequently helped Jordi out at the restaurant and that is how we came to know her. Joana was born some five years ago. I am sure you have seen many photos of Joana and me. Recently they moved to the countryside where they bought a house and Carol, among other things, keeps busy overseeing the education of her daughter.

Next come Miguel and Mari Paz, two of our newer friends. They are Juanjo’s parents and we met them at a surprise party for Vilma a couple of years ago. Miguel is a barber and Mari Paz is a publisher and they are very active in the Falla Plaza Jesus. They were the ones who invited us to become falleros de honor for the 2014 Fallas. It was their first visit to our place and we were pleased to finally have an opportunity to reciprocate for all their kindnesses.

Next to Mari Paz are Klaus and Zahava. Susan met Zahava at High Holiday Services here in Valencia in 2009. Zahava is a practicing homeopath and Klaus is heavily involved in homeopathic research. She and Susan frequently get together for coffee or movies and Zahava has frequently invited us to celebrate Jewish holidays with them.

Brian is next to Zahava. We met Brian at Food and Fun the day that Jordi did his workshop. Brian is currently overseeing the US Consular Agency here in Valencia after having spent many years in the Foreign Service. His wife, Ofelia, is an artist, and unfortunately was a bit under the weather yesterday. The four of us frequently get together dining at home or at a variety of restaurants. Brian and Ofelia have a daughter, Olivia, who currently lives and works in Berlin.

The festivities began at 2:30 and ended close to 7:00. Susan did an amazing job putting everything together and all the elements of our Thanksgiving were absolutely spectacular! 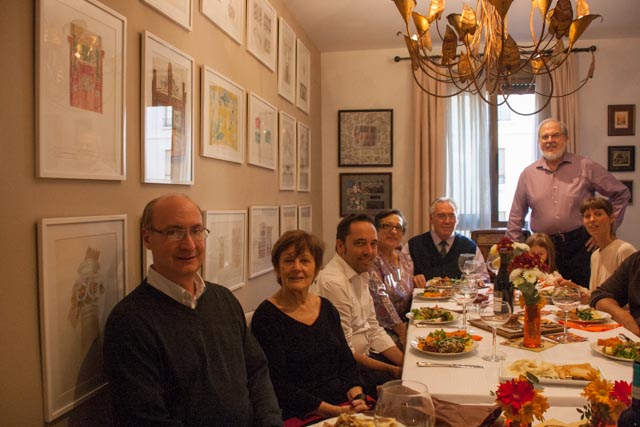