The thermometer keeps flirting with zero degrees Celsius at night.  During the daylight hours it struggle to reach double digits when using the Celsius scale.  People are bundled up and just about everyone keeps saying that this is a historic cold.  The longer the cold snap lasts the greater the number in the statement, “It hasn’t been this cold in the last XX (Fill in your own number.) years.” According to official records the last time it was this cold in Valencia was 2005.  I am not finding it at all uncomfortable.  My difficulty is more with hot weather than with cold.

My cold is improving although it left me feeling rather tired yesterday and that helped limit my outdoor activity.  I caught up with Miguel around noon because he had e-mailed me that a package for me had arrived earlier in the day.  It turned out to be the magic that I had ordered on Wednesday evening.  The package included everything that I had ordered.  Several of the items were for the kids show that I might end up doing for Jordi at his restaurant, however the prize in the package was a book by Woody Aragón called A Book in English.  The book has gotten outstanding reviews and I am looking forward to getting really into it.  I love the first effect in the book, which involves maximum spectator participation.  I liked it so much that I made up a version using business cards rather than playing cards.  Today may just be the day that I delve further into the book.

I received an e-mail yesterday afternoon around 5:00 from Miquel Soriano who is the business manager for Magic Agora.  They are about to launch a new initiative on February 14 and they needed an English translation as soon as possible so that the English speakers who visit the site would be as up to speed as the Spanish speakers.  Magic Agora will be offering a series of videoconferences that will feature some of the biggest names in magic.  Attendance will be limited so that those attending the conference will have the opportunity to ask questions.  When necessary, simultaneous translation will be offered.  This will be a free service and, as it turns out, the first two guest speakers will be Woody Aragón and a player to be named later.  In my translation I called these conferences coffee klatches because that is precisely what they were describing in the Spanish version.  My only question is how many of the young crowd will know what a coffee klatch is?

I also used my afternoon and early evening to work on my translation of the Dean Dill article.  I am about halfway through it and I hope to finish it up this weekend.  Around 9:00 we snuck out to La Fórcola and had an early dinner.  We started off with a plate of steamed mussels and then I chose a linguine with seafood for my entrée and Susan chose a pasta with a cheese sauce for hers.  We ordered a bottle of verdicchio to go with the meal and it turned out to be an excellent choice.  We both had dessert, but we passed on coffee.  When we got back home we chatted with Rachel for a while and afterwards we watched some TV before calling it a day.  We have no grand plan for today so we shall wait and see what develops. 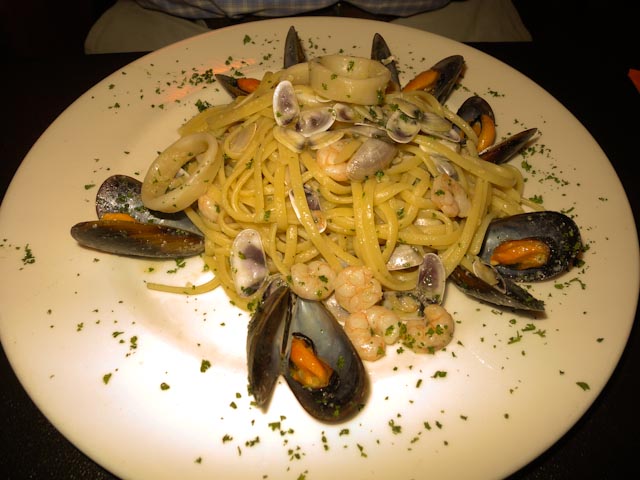 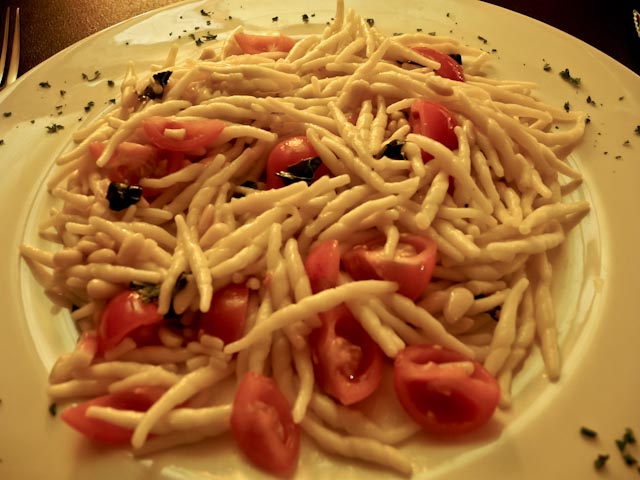