Yesterday, for the most part, was rather uneventful.  I managed to get in a late morning workout and by the time I returned home Susan had already left for her Pilates class.  I headed out to give my first ever English lesson before Susan had returned from the gym.

Melissa is one of the servers at La Fórcola and she is also pursuing a college degree.  She wants to improve her English skills so that she can qualify for study abroad.  One of the qualifiers is passing the TOEFL exam.  At 4:00 we met at Las Torres, which is a small café on the corner of Borrull and Guillén de Castro.  We spent an hour conversing in English and she did most of the talking, as should be the case.  In the process I gave her some grammar hints and I supplied her with one or two words in English.  Although she refuses to believe it, she speaks quite well and rarely needs to revert to her native language to find a word.  Since she also wants to improve her writing skills I gave her an assignment for our meeting next Monday.  When 5:oo PM rolled around I think we both felt that we had both profited from our hour together,

At 7:30, finally reunited, Susan and I headed our for Klaus and Zahava’s house.  When we got there we had a quick drink and then struck out for Trattoría da Carlo, which, according to Klaus, makes the best pizza in all of Valencia.  Interestingly enough, they only serve pizza on Monday night and only on the Mondays between October and May when business tends to be slow.  Rather than take a cab or the Metro we decided to walk the two and a half mile to the restaurant.

When we walked in we discovered that it was a rather slow night.  A couple of other tables were occupied, but that was it.  Klaus and Zahava were greeted by Carlo since they have been to the restaurant a number of times and then he introduced himself to us.  We sat down and ordered a beer and before we knew it four of them had made their appearance at our table along with a plate of olives.  On our way over we had already discussed what we were going to order so when the waiter cam to take our order we ordered two antipasti – a plate of fried squid and artichokes and an assortment of charcuterie and mozzarella.  To our great pleasure and surprise, Carlo sent over a third appetizer on the house.  It was some of the most delicious baked eggplant that Susan and I have ever tasted.  The other two appetizers were outstanding, also and it was very clear from the outset the quality of the product served here was very high.

Our plates and silverware were cleared after we finished each dish and next to make its appearance was a pizza margherita.  It was pizza at its most basic – an outstanding crust with just the right amount of char, a tasty tomato sauce, cheese and basil.  After one bite I knew Klaus was right.  This was an exceptional pizza.  We followed up the first pizza with a four-cheese pizza.  It was also very tasty and very filling.  We could not finish it.  For dessert we ordered one slice of triamisú that we all shared.  We ended the meal with coffee and an after-dinner drink.  To atone for indulgence we decided to walk home and we did so through streets that were mostly deserted.  Susan and I got home a little after midnight and we read for a while to let our delightful meal further digest. 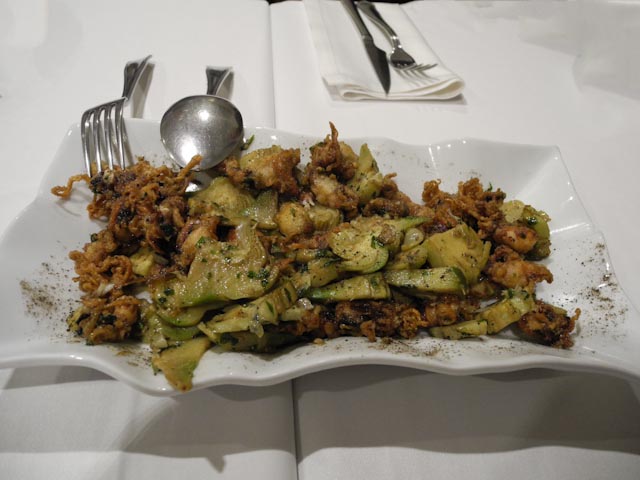 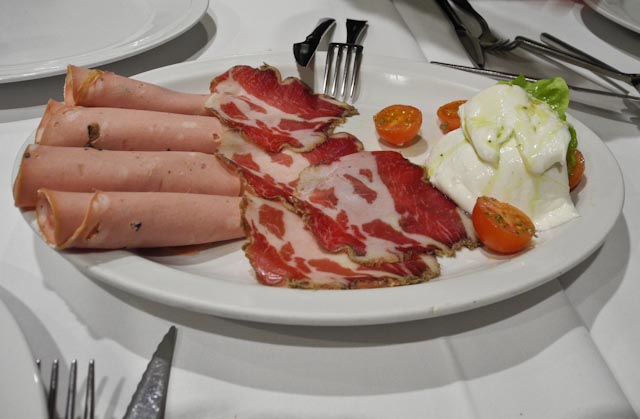 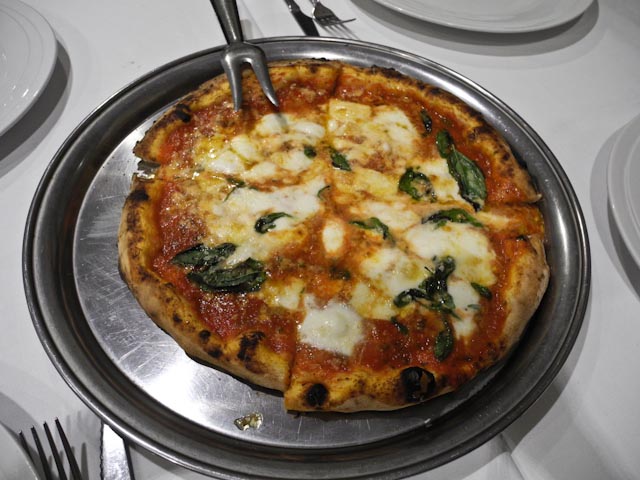