The weather continues to be tourist council perfect.  We woke up late this morning after a rather late evening.  There is really nothing on today’s daylight calendar, but in the evening we will head to Brian and Ofelia’s for a Christmas Eve dinner.

Yesterday’s daylight hours were rather uneventful.  Susan and I did an in-house workout using our Fit Balls and our rubber resistance.  After that I went in search of some bread to have with lunch.  The shopping list expanded once I set foot in the deli and I also picked up a bottle of wine, some anise flavored cookies and a bag of chips.  On the way back home I discovered a restaurant I had not seen before – Bajando al Sur – and it turns out to be a creperie.  We have put it on our list of restaurants to try.

Susan made us a salad for lunch and she used some of the smoked turkey that we had bought from Solaz, as well as some Comte cheese that we had also purchased from Solaz.  We had a rather light lunch because we would be having dinner with Zahava and Claus.  We spent the rest of the afternoon relaxing and reading.

We headed out a little after 7:30.  It was a bit brisk as we made our way to the Plaza de la Reina, but it was not unpleasant.  Claus and Zahava live on the top floor of an apartment building and we took the elevator to the fourth floor and from there climbed a flight of stairs to get to their apartment.  When we walked in we were greeted by the smell of potato latkes cooking and the sight of many traditional Hanukkah decorations.

After lighting the fourth candle we all took our places at the table in preparation for a wonderful meal.  We started off with potato latkes topped with crème fraiche and caviar.  We all helped ourselves to seconds.  We next enjoyed a salad that was dressed in vinaigrette that included a very special roasted pumpkin seed oil that is available only in Austria.  Our main course was monkfish prepared with a delightful sauce accompanied by green beans and rice.  We chatted a bit to let the meal digest some and then we renewed our attack.

For dessert we enjoyed some Stilton cheese, two varieties of grapes, some cookies and a lovely Taylor’s port.  We got into a discussion of after dinner liqueurs and Claus brought out a bottle of orujo made from a Martín Códax Albariño and a Pear William made in Germany.  I of course needed to taste both and they were wonderful.

Claus and Zahava love to hike, travel and eat.  While we dined we heard about some of their adventures while hiking a portion of the Camino de Santiago, as well as the Costa da Morte.  Zahava told us of an amazing meal that she had at Le Train Bleu in Paris.  Here is a link so that you can take a look at this unbelievable space. http://www.le-train-bleu.com/uk/index.php We shared with them our experiences in Comillas and San Sebastián.  Before we knew it four hours had gone by rather rapidly.  We were hoping to get home so that we could speak with Rachel who is now in Seattle.  There was a bit of a rush since she is unreachable during the Sabbath.

On our way home we passed by Carusel and spied Jordi at the bar taking a break and enjoying a cold drink.  We walked in and greeted him and seconds later Sara walked up and greeted us.  She was there having dinner with her sister and some friends.  We chatted for a while, wished everyone a Feliz Navidad and then went on our way.  When we got home we were able to catch Rachel as she was unloading goodies from her visit to Trader Joe’s.  She got to the airport in Denver in spite of the snow and her flight took off on time and was rather uneventful.  We said our good nights and soon after that we headed for bed.

Zahava and the menorah 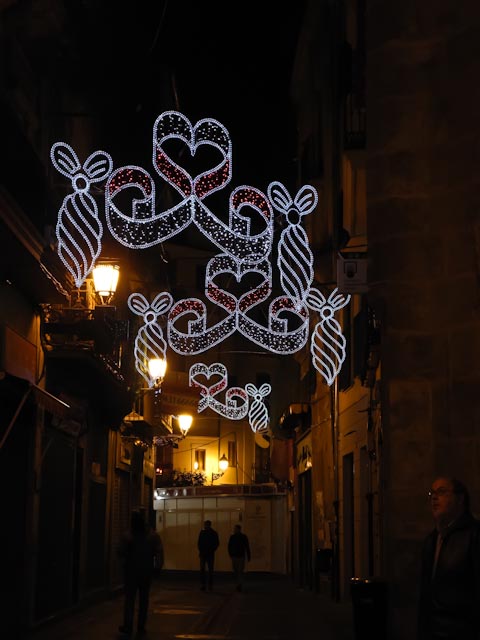