Posted on December 9, 2011 by martykaplan

It is overcast and cool today.  Susan headed of to the hairdresser’s at 11:00 and I was off to the gym at 11:30.  I picked up a few things on the way home and I am waiting for Susan’s return as I work on this blog entry.

Yesterday was yet another busy day.  Miguel came by a noon to take me shopping.  We were heading for Alfafá, which is just outside the city limits as you head south to Alicante.  There are a goodly number of big box stores there and we were headed to a store called Leroy Merlin.  It is on the order of a Home Depot and is just as big.  I was in the market for another nightstand for the bedroom and Miguel suggested that this might be a good place to look.  The parking lot was mobbed, but we managed to find a parking space and entered the store.

I looked at several possibilities, but there was one model that caught my eye.  It was oak in color, had four drawers, was already assembled, and was on sale.  Miguel brought the car around and we loaded it into the trunk.  We then shot across the street and headed to a sporting goods store called Decathlon.  It too was enormous.  It was much bigger than the Big 5’s that I have frequented in Los Angeles and I was amazed at the amount of ski clothes they had on display.  I was in the market for workout pants.  I thought I had left a pair or two here, but that was not the case.  I managed to find two pairs that will suit my needs well as we move through the colder months of the year.

When we got back home Miguel schlepped the nightstand upstairs.  Given its size we decided to put it on Susan’s side of the bed.  At will give her more storage space for her clothes.  The smaller one will be mine and it will give me a place to put my glasses and any book that I might be reading, thus avoiding the need to get up and put them in the living room.  We had invited Miguel to stay for lunch and while he and Susan schmoozed I went out and bought a loaf of bread and some dessert.

While Susan put the finishing touches on a veal and mushroom dish, Miguel and I munched on some olives and some chips.  Susan joined us until the timer went off and we all took our place at the table.  We started with a salad and then continued with the veal dish, which Susan served over pasta.  We enjoyed the freshly baked bread and a recently opened bottle of Verdejo.  For dessert we shared a pastel de manzana.  Susan and I had coffee and Miguel decided to pass on coffee.  We chatted a bit after lunch and Miguel headed off around 4:00.

The reason he was free yesterday was because yesterday was yet another día festivo– El Día de la Inmaculada.  Around 7:00 last evening the statue of the Virgin was paraded through the streets accompanied by the Municipal Band.  We waited until they passed and then we flagged down a cab and headed over to Brian and Ofelia’s for dinner.

Ofelia had recently returned from a sojourn in Belgium where, among other things, she helped her niece celebrate her 18th birthday.  While we munched on some ham and cheese we caught each other up on the latest happenings.  Brian then called us to the table and we enjoyed a sumptuous meal of mussels steamed in a white wine and tomato broth that was laden with a variety of herbs and spices.  We then enjoyed a very tasty baked salmon, potatoes and steamed asparagus.  Dessert was a homemade apple tart and it went perfectly with our meal ending coffee.  At 10:00 the four of us left the house, heading for a jazz club that is located just around the corner from their place.

Café Mercedes is located on Calle Sueca and it features jazz.  Here is a link to their website http://cafemercedes.es/ Tonight’s group was a trio of singers from Navarra who were backed up by a bassist, a pianist and a drummer.  The name of the group is The Jazzin Singers and the leader of the group is Teresa Luján.  They reminded me a bit of Lambert, Hendricks and Ross or, if you need a more modern comparison, The Manhattan Transfer.  Their first set lasted an hour and they started their second set a bit after midnight.  We left the club a bit after 1:15 and Brian kindly drove us home.  We walked through the door at 1:30 and gave Rachel a call.  We chatted for a while and at 2:00 AM we collapsed into bed.

Ofelia, Brian, Susan and I 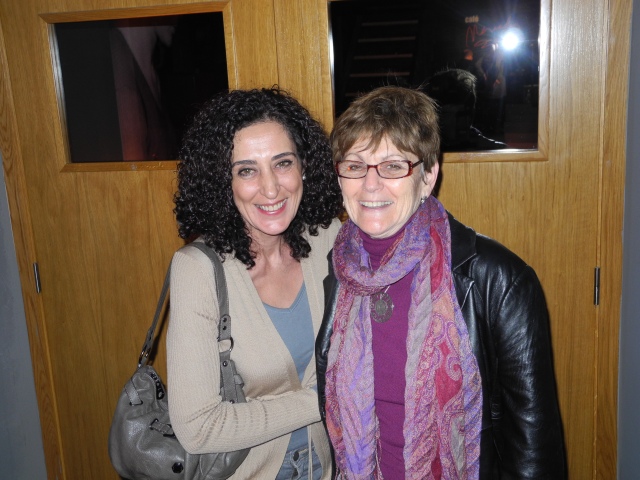 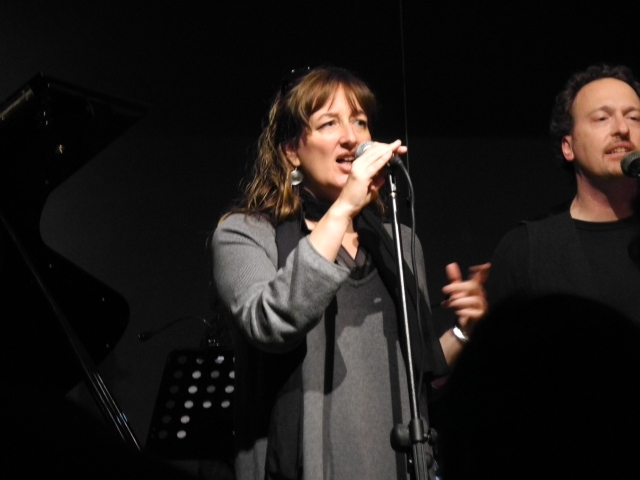