It has rained overnight, but the sun is beginning to peek through as we begin a new day.  We have breakfast, clear the table and wash the dishes.  We both turn on our computers and catch up on our e-mail, as well as taking care of a couple of other tasks.  We work until 1:00 and then we decide to head out to Seu-Xerea to deliver the pictures we printed and also a DVD that Susan produced.  The restaurants doors are still closed so we head to the square and have a drink. We decide to have lunch at El Molinón and then return to Seu-Xerea.

El Molinón is empty save for two other diners.  It is early after all.  It’s only 2:00 o’clock.  We order a salad, some pimientos de Padrón, setas a la placha and escalopines con cabrales.  Pimientos de Padrón are a small green pepper that can be spicy or not.  There is no way to predict if it will be spicy or not.  You just have to pop it in your mouth and be prepared.  Setas are probably closest to a portabella mushroom and these are simply grilled on the flatiron with a little bit of olive oil and salt.  Escalopines are thinly pounded breaded veal cutlets served with a sauce that is made from heavy cream admixed with Cabrales cheese.  Susan is intrigued by the sauce so she asks permission to go upstairs and chat with the cook.  She comes back down with the recipe, having taking a picture or two of the small kitchen that produces such a wide varieties of tapas.  After dessert and coffee we head back to Seu-Xerea, which is now open.

The name Seu-Xerea derives from the two neighborhoods, Seu and Xerea, which the restaurant borders.  We discover that fact while we are waiting for Stephen to emerge from the kitchen.  When he greets us he tells us that Jordi is in Albacete today discussing the possibility of marketing his own line of cookware.  We give him the pictures and the DVD and he thanks us for both.  We then head on our way.

We decide to explore a different part of the city so we head to the Torres de Serranos, which is one of the ancient gates that were part of the walls that surrounded the city hundreds of years ago.  The gates were opened every morning and closed every evening.  If you were returning from the fields and you discovered the gates locked, then you slept on the ground outside the walls.  We spend a good hour wandering the streets and we eventually return to our starting point.  On our way back home we stop at the Horchatería Santa Catalina and have a granizado de horachata and some fartons. Refreshed we head back home.

Pepe comes by at 8:00 and we head out to the meeting of the veterans of magic.  These are some of the guys who used to get together to talk magic and tricks before there was a magic club in Valencia.  There are six of us gathered this evening.  After a brief discussion it is time for show and tell.  I do two of the newer effects that I am working on and the assembled group likes both effects.  They especially like the instantaneous change of four Aces to four blank cards. We stop a little after 9:00 and we head back to our place to pick up Susan, which we do, and then we head out for dinner.  The restaurant we choose is rather unremarkable.  When we finish Susan and I head back home and end up calling it a day at midnight.

The following photos are courtesy of Susan Kaplan.

Another shot of the kitchen

This is a shot of the bar at El Molinón. I finally realized what the tall metal container was for. When you pour "sidra" (a slightly alcoholic cider) you need to aerate it to release its full flavor. To do that you hold the bottle in one hand high above your head. You hold the glass in your other hand at about knee level. You then pour. If you happen to be off target, the metal container holds the spillage.

This horse was to be part of some outdoor production. 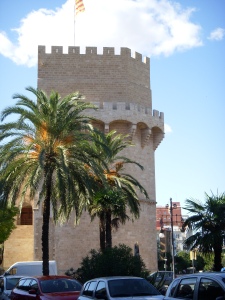 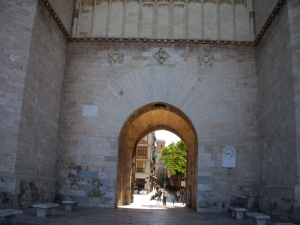 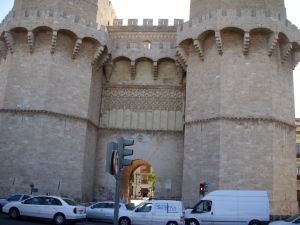