The rain continued through the night and we woke up to a very rainy morning that would turn into a very rainy day.  That being the case, I decided that it would be a good day for me to stay indoors, catch up on my reading and practice my magic.  That is essentially what I did for most of the day, taking the occasional break for some sustenance.  I finished EMPIRE FALLS by Richard Russo and I enjoyed it immensely.  Susan’s day was a bit different so I will let her tell you about it in her own words.

Yesterday I had a very interesting experience.  I decided to seek out Yom Kippur services.  It just happened that one of the congregations was holding their services at the Hotel on our little plaza.  So I had no excuse to not go. I am so glad I did.  It was very interesting- a small group and very informal.  The service was primarily in Spanish which I could understand, unlike at home when it is primarily in Hebrew.  I learned that there are 4 tiny congregations in Valencia.  This one is led by a woman from LA who has been living in Valencia for 40 years.  While there were a few people who actually come from Valencia(sort of like California), many did not -Ariel is a Moroccan Jew whose mother was from France and his father from Morocco, there was a young couple was from Argentina, Roberto was from Connecticut but has been living in Valencia for 45 years.  Claus (originally from Germany) and his wife Zahavah from Canada just sold their home in Canada and have move here permanently.  There was a couple visiting from France that came, Claire from South Africa, and me from LA.  As you can guess, we had some time to chat with each other and in some cases we exchanged names and phone numbers.

This is also the second day of rain.  The rain here comes and goes all day – first a light sprinkle, then it stops, then the heavens open up and there is a huge downpour that soaks you from your ankles to your knees if you happen to be out walking with an umbrella,  which I have been on more that one occasion. Then the sun comes out, then it rains some more. The good news is that it has not been cold, so it really doesn’t bother me at all.

Wednesday evening we are taking a cooking class on Tapas at a local cooking school.  The chef, Koldo Royo, is an award winning chef so it should be quite enlightening.  We are really looking forward to it. Thursday we head up to Madrid and then to la Rioja with friends.  We will spend one night in the Rioja at la Bodega Marqués de Riscalwhere Frank Gehry designed the hotel.  It is stunning.  I can hardly wait to take pictures of it.

So, that is today’s abbreviated report.  It looks like today will be a good day to stay close to home.  We shall see what develops.  No new pictures to speak of, so I will post a few taken on Sunday. 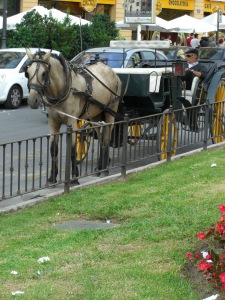 This is the first time I have seen a horse drawn carriage in Valencia. 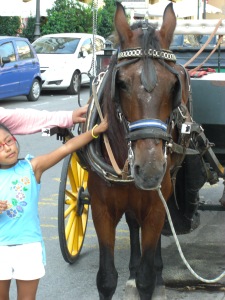 Mr Horse up close and personal! 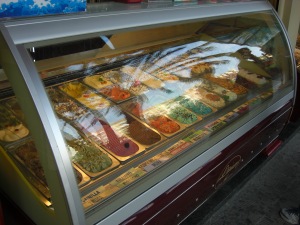 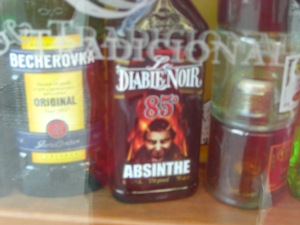 We passed up the chance to buy a bottle of 170 proof Absinthe. 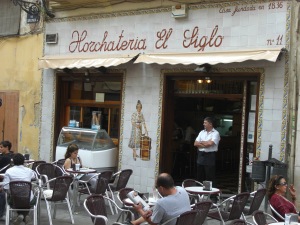 Another horchatería directly opposite Santa Catalina 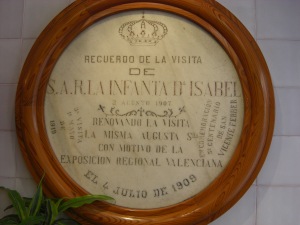 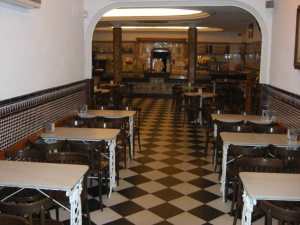 Interior of the Horchatería Santa Catalina