Pepe came by at 11:15 this morning and we headed out to the train station, which is all of five minutes away from the house.  We bought our tickets to Gandía, passed through the turnstiles and boarded our train.  It was a local that would make a number of stops before we reached our destination, but the trip would last less than an hour.  Pepe had a backpack that held the vegetables for today’s paella, as well as the high quality saffron.  Five minutes after boarding the train, it pulled out from the station.

We reached Gandía at 12:45 and in traveling sixty miles to the northeast of Valencia the weather had changed.  The morning sun had vanished and we were caught in the middle of a sudden downpour.  Pepe’s sister, María, was picking us up and we watched her pull up all of two minutes later.  It took us a goodly amount of time to get to Pedreguer because of the need to pass through several small towns and the fact that there was construction going on.  When we arrived, we found a parking space right outside of Pepe’s mother’s house and we entered.

I have known Pepe’s family almost as long as I have known Pepe and I have eaten at his mother’s table on a number of occasions.  Truth be told, I feel very much at home here. The paellero, which works of butane gas, was in place and ready for action.  This is what a paellero looks like, minus the advertisements: 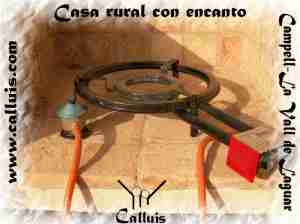 The fire was lit and the paellera was placed in the heat source.  The first ingredient was olive oil from olives that had been grown and pressed by a neighbor.  The taste and quality were better than any olive oil you can buy at any gourmet store you would care to name.  When the oil was hot the meat was added.  Today’s paella was to be a paella de carne and so we added chicken, pork and rabbit.  Sometimes duck is added instead of pork.  The reason foe either is that they are fatty and will give off enough juices to add a consistency to the paella.  As the meat cooked to a state of caramelization, the troops got busy preparing the greens that we would use in the paella.  We shucked a goodly quantity of broad beans somewhat larger and flatter than fava beans.  We also worked on some of the largest green beans I have ever seen, cutting off the end and breaking them into smaller pieces.  Pepe’s mother and sister grated the tomatoes that would be part of the sofrito.  Three different varieties of tomato were used.

When the meat had reaches its state of caramelization the vegetables were added and briefly cooked.  Then came the water – three cups of water for each cup of rice – and the rice.  At this point Pepe’s mother added some small meatballs that she had prepared the day before and everything proceeded to happily boil.  Fifteen minutes later the rice had reached the perfect stage of doneness and the heat was turned off and the paella was left to rest.

There were nine of us at the table and we happily anticipated the paella that would take its place of honor at the center of the table.  The paella made its appearance and we, the assembled, attacked with gusto.  The paella was superb!!  We washed it down with a couple of bottle of a very nice Rioja wine, La Vía Mágica, which was produced for consumption at last year’s Magic Convention.  We were drinking the results of a second bottling.  The wine is not commercially available.  We finished the meal with buñuelos de calabaza made from pumpkins grown by Pepe’s brother-in-law.  After an after lunch coffee, we all retired to the second floor to the television room. The four younger members of the group were on the second floor playing on the computer.

Within five minutes all of us were deep into our siesta.  We began to stir a little before 5:00 and shortly thereafter María drove us back to the station and our train delivered us to Valencia a little before eight.  We were tired enough that we had a light snack around 10:00 at home and after a brief spate of reading we made ready for bed.

The patio of Pepe's mother's house

Pepe - ready to do battle

The oil has been heated and the meat is now added. 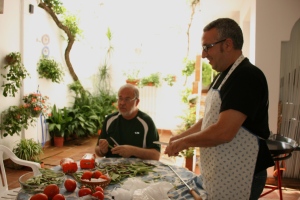 Your author demonstrating that he has domestic skills, also.

The vegetables have now been added. 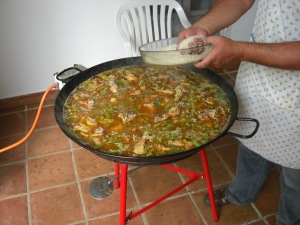 The water, rice and saffron have now been added. 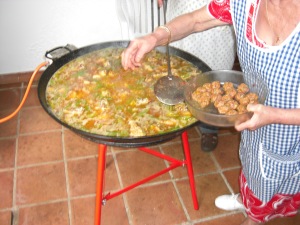 Pepe made a paella and we helped...eat it.