On Fridays the rental company that manages our apartment sends in someone to clean the apartment and change out the sheets and towels.  They finished up about 1:30 and we decided to take advantage of the sunny day and head for the beach.  The only question we had was how to get there.

We opted for taking the Metro.  We took the Line 5 Metro to its last stop and there we connected with Line 6, which is a surface trolley car.  Our entire journey took less than 20 minutes and after a three minute walk we found ourselves on the sands of Malvarrosa Beach.

Malvarrosa Beach is a long sandy beach that seems to go on forever.  There are numerous sites where one can rent a beach umbrellas and chaise lounges and, of course, you can bring your own.  When you get hungry you have a multitude of restaurant choices.  Many of them are set back from the beach where the sand ends and the paved walkway begins.  Some are directly across the street from the beach.  Our usual test of a new restaurant would not work today because it is September and all the locals are back to work.  No restaurant this day would be filled to capacity.  We passed on a number of the restaurants we saw and headed to one called La Alegría de la Huerta.  It looked welcoming and we liked the menu choices.

Every restaurant in Spain, by law, must offer a menu del día.  It includes an appetizer, an entrée, a beverage of your choice, and dessert.  Sometimes your end of the meal coffee is included.  Some restaurants will even you an after dinner drink on the house.  As you can well imagine, the price of the menu can vary.  Most average about 10 Euros, but I have seen some offerings as low as 6 Euros and I recall seeing one for 30 Euros on a previous trip.  Most restaurants will post their menu, some do not.  In that case, you have to ask because their hope is that you will order off the regular menu.

Since it was a beautiful day and we were seated at a table that had a glorious view of The Mediterranean, we decided to order off the regular menu.  We settled on the house salad, puntillas, olives, boquerones en vinagre and a zarzuela de pescado y mariscos.  For dessert we ordered a slice of a home made coffee flavored pie and, of course, our usual coffee.

The house made salad was a treat.  It had a variety of lettuces, tomato, three different varieties of olives, corn, sesame seeds, and walnuts.  Puntillas are the little feet of the squid.  They are prepared in the same way as calamares back in the States. They are breaded and deep fried.  A little squeeze of lemon on the top and you are good to go.  You can also put a dab of a garlic infused mayonnaise (ali oli) on top and discover heaven on earth.  Boquerones are anchovies before they undergo the heavy salting process that we have come to know and love.  They are traditionally served in a marinade consisting of olive oil, vinegar and chopped garlic.  A zarzuela is a medley of fish and seafood that is prepared with a rather delicious brown sauce.  Our medley consisted of generous portions of monkfish and dorade, mussels, squid and shrimp. Since Susan and I were sharing, we had ordered a single portion and it was a good thing that we had. Dessert rapidly disappeared along with our coffee and we decided to linger a bit over a liqueur.  We paid our bill, collected our gear and headed out to the beach.  When I looked at my watch I was surprised to see that it was 4:00 o’clock.

The beach was not very crowded, so Susan and I had no problem renting a beach umbrella and two chaise lounges.  Out came Susan’s Kindle and my paperback copy of EMPIRE FALLS and we proceeded to read for the next two hours.  We gathered our things and crossed the street parallel to the beach and there was a bus stop.  We took the 32 and it dropped us off a mere block from our house.  It is great living in a city where everything is EASILY reachable by Metro, bus or train.

Our evening for the most part was uneventful.  We ventured out around 10:00 o’clock for a glass of wine and a tapa and were in bed before midnight.  Tomorrow we head out to Pedreguer with Pepe to visit with his family and witness the preparation of a paella.

A shot of our meal and the view from our table

Puntillas up close and personal! 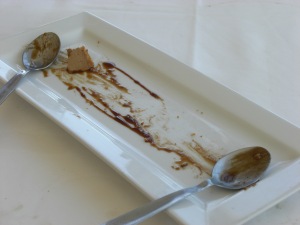 Yes, the dessert was that good!

The rules of the beach