It’s raining hard in Valencia and, ironically, I am listening to Harry Chapin singing taxi that starts off, “It was raining hard in Frisco…” The temperature has fallen into the 70’s and, when the rain stops, it is very pleasant out.

Our portero, Antonio, has a small place in the country where he also has a garden.  Monday morning we found a very large bag of tomatoes at our front door courtesy of Antonio. Many of them have found their way into a couple of batches of gazpacho, as well as a salad or two.  We like our gazpacho with a picado. A picado is the word the Spanish use for finely chopped vegetables that are added to a gazpacho. In our case we are talking about tomatoes, cucumber, onion and peppers.  We also add croutons.  Lately we have taken to adding jamón serrano and a hard-boiled egg, which one would find in the Andalusian version of gazpacho that is called salmorejo. A generous bowl of gazpacho makes an excellent lunch.

Last night we had dinner with Brian and Ofelia at La Fórcola. Tomorrow Ofelia and six other artists will sign a year’s lease on a space in Russafa that will be converted into a studio and gallery.  That will conclude a search that has gone on for the past several months. We chatted about this and that while we enjoyed our meal.  We started off with a plate of salume and fresh mozzarella followed by a pizza and some linguine with seafood.  We followed that with dessert, coffee and a chupito. As we were enjoying our liqueurs, I did some magic for my appreciative audience.

The other day I was surprised to realize that I have been doing magic for close to forty years. It all started at Foxcroft School in Middleburg Virginia when the new head of the English Department, Biff Smith, came on board.  Biff, in addition to being an amateur magician was and is an accomplished jazz pianist and composer.  He has a couple of albums to his credit and for the past I don’t know how many years he has been teaching at The Berklee School of Music in Boston.  The rest of the year he teaches English at the Robert Louis Stevenson School on Pebble Beach.

Most faculty offices were located in a wing on the second floor of the Schoolhouse. As you made your way down the corridor the Foreign Language Department was the first door on your left and the English Department was the first door on your right.  Most afternoons Biff would drop by and do a magic effect or two for me.  I must immodestly confess that I was a very appreciative audience. There came a fateful day when he asked me if I would like to learn a few tricks. And after an enthusiastic yes, we agreed to meet Saturday morning at his place.

That Saturday was my initiation into some of the secrets of magic. Biff showed me a couple of card and coin effects, all of which were very basic, and he then proceeded to explain them to me. I then went home and began to practice.  After another session or two Biff said that it was time for us to visit a magic shop and we were fortunate because on of the best, Al’s Magic, was, at that time, located on Pennsylvania Avenue in Washington, DC. Early one Saturday morning, with Biff at the wheel, we made the hour journey into the District. We parked the car and we walked in.

It was Saturday so the store was busy. In the 70’s it was difficult for stores to survive economically by selling magic and only magic. Therefore they supplemented their income by selling jokes, make-up and costumes.  In addition to all the foregoing Al had a rather extensive magic department with a goodly number of books and six or seven display cases brimming magic.  Al had the well-deserved reputation of being the best demonstrator in the business.  Al could sell you anything, but he would not sell you an effect if he thought or he knew that it was beyond your abilities.  I took everything in and finally I was able to focus.  Al showed me a few beginners’ tricks and, with Biff’s advice, I made my selection and I also picked up several decks of cards.  At that time most magicians used bridge size cards and it was not until a few years later that poker size cards became the cards of choice.

When we got home, I unpacked my goodies and tried to remember Al’ s teaching tips.  It took a bit of time to do them passably well and I relied on the patter that came along wit the effect.  The good news when you start to do magic is that you are totally unaware of how much you do not know.  Your constant companion as you take your first steps in magic is imitation.  You see someone do something that you are familiar with and you consciously borrow both patter and presentation ideas.  It takes a while to discover your uniqueness as a magician and a creator and, truth be told, most magicians never make that discovery.  They acquire effects, but they do not do magic.

Biff and I both celebrate birthdays in May.  Mine is on the 12th and I believe his is on the 13th.  Soon after our first visit to Al’s we decided that we should do a magic show together and invite all our faculty friends and their spouses.  Fearless and clueless I did my first performance ever in front of a group of friends and colleagues. I doubt that the magic was very good and the only saving grace was the fact that I had been on stage in a number of plays and I did have stage presence. 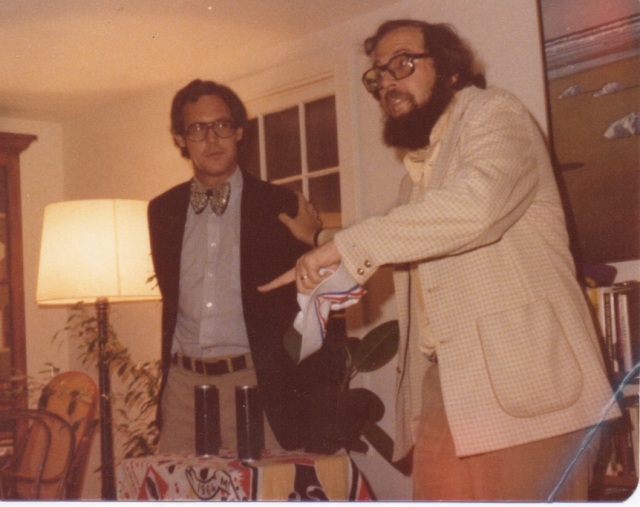 Biff and I continued to meet occasionally to practice our magic and it was also an opportunity for me to learn new effects.  We also continued our visits to Al’s and were happy when we escaped without spending more then a hundred dollars on new magic. In December of 1977 Biff gave me a copy of Walter Gibson’s The Complete Illustrated Book of Card Magic and it has had a special place in my magic bookcase ever since.  Here is a copy of the inscription. 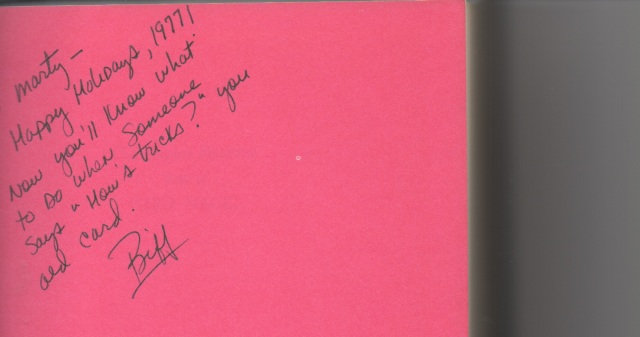 When Biff accepted his current position at RLS my interest in magic waned.  You really need the company of other magicians to challenge yourself to grow in the art.  I did visit with Al from time to time and on occasional forays into Baltimore I would visit with Phil Thomas at his Yogi Magic Mart.  However, it was not until we moved to California in the summer of 1983 that my interest in magic revived.  I will talk about that in another post.