It was a little more than a year ago that Paco de Andrés passed away.  Paco was the dean of Valencian magicians and I wrote the following piece the day after his funeral.  I wrote:

“Yesterday’s funeral for Paco D’Andrés was a very sad event on many levels.  As you may already know from previous posts, Paco was one of the fathers of magic here in Valencia.  He was part of a group that came to be known as the veteranos and there Thursday meetings were dedicated to the discussion of magic.  They studied, they read and they traveled far and wide to increase their knowledge and their skill.  Of the original members only two are still with us – Jerito who is in his 90’s and Gurrea who is 70.

Paco was a quiet and unassuming man.  To look at him you would never know that this gentle man was a walking encyclopedia when it came to the history of magic in both Spain and Europe.  He had seen many of the greats of his day perform.  He took Juan Gurrea under his tutelage and helped him design a prize-winning act at FISM many years ago.  Paco also played an important role in Nacho Diago’s development as a magician and Nacho acknowledged that in a very heartfelt post on his Facebook page.  Paco invited Pepe to join the tertulia of the veteranos some thirty-three years ago.  I know it was Paco who instilled in Pepe the love and passion that he feels for magic.  Without Paco the state of magic in Valencia would be very different.  I think it is safe to say that without Paco there would not be a CIVAC today, the world would have never seen some world class magicians develop and the Magic Agora project never would have seen the light of day.

I always looked forward to Thursday evenings with Paco whenever I was in Valencia.  I always had some effect to share with the group, as did he.  Paco would usually wait until all the others had performed and then he would make his contribution.  Paco often complimented me on the effects that I presented.  He especially appreciated the patter that created for each of my effects.  At one point he compared me to Padre Ciuró who was one of the fathers of magic in all of Spain and whose publications became the bible of magic for many Spaniards wishing to learn magic.  One moment that stands out in my mind was when I presented an effect that is known as the Driebeck Die.

The Driebeck Die is, just as its name implies, a die that is oversized and red in color.  It also involves a black box.  Inspired by a presentation in rhyme that Terry Elton created, I came up with a presentation in English that borrowed heavily from Terry’s presentation and then I set about creating a presentation in Spanish that used rhyming patter.  The presentation went over well and several of the members present insisted that I needed to present it in a number of different venues, which I eventually did.  I offered Paco my patter and he turned down my offer.  He looked at me and said, “This is obviously your effect and there is no way that anyone else could do it as well as you.” Thank you Paco for your kind words and your inspiring me to be creative as I try to improve and increase my repertoire in Spanish.”

The members of the CIVAC had promised to organize a memorial gala in his honor and this past weekend was when that promise was kept.  The memorial gala was part of the 24Horas Mágicas celebration, which like Tops somehow continued to grow and grow into a 48-hour event.  Our committee, which was responsible for both planning and executing the celebration, met on consecutive Thursdays for close to three months.  Each event had a committee head that was responsible for organizing and coordinating that event.  There were other who were in charge of publicity, program design, technology and communication with the theater where the event was to be held.

The first event, which was an added extra, was a dinner at La Terraza del MuVIM, followed by a presentation of Miguel Gómez’s close-up spectacular called La Antología de Cartomagia Española.  We had planned for sixty people to attend, magicians and lay people alike, but as it turned out there were close to 90 people present.  Jordi put together an outstanding meal that included salad, bunuelos de bacalao, croquetas and a bean stew filled with all kinds of sausages.  The beer and wine flowed freely.  The meal ended with coffee and dessert.  We started the meal at 9:00 and we didn’t enter the museum’s salón de actos until midnight.  Miguel Gómez, one of Spain’s top card magicians, spent the next seventy minutes amazing us with feats of magic done with a deck of cards.  By the time we said our goodbyes, it was close to 2:00 AM.

We slept in a bit on Saturday and headed to La Rambleta a little before 2:00 PM.  We got our accreditation and headed downstairs to the dealers’ room.  There were five different stands that did moderate business because many of them had been at Almussafes the previous weekend and they were selling to the same audience.  We sat down at a table with a number of friends and ordered a sandwich and a drink and we spent the next hour or so chatting about this and that. It was a lovely sunny day so Susan and I took a little walk and had an after-luncheon drink at an outdoor café.  We made it back in time for the close-up gala.

The organizer and presenter of this gala, Juanma González, was also the first to perform.  He did a very expert and entertaining routine of dice stacking.  We were then treated to the magic of Miguel Gómez, Pedro Bryce, Lionel Gallardo, Vincent Ginés and Javi Benítez.  Doing comedy magic, which was in direct contrast to the expert and serious routines of the other performers, Javi stole the show.  In truth, this was of the best close-up galas that I have seen at any convention I have attended.

At the end of the gala we left the theater in sear of a breath of fresh air and a cup of coffee.  The next gala was scheduled to kick off at 8:00 PM.  We took our seats at 7:45 and the curtain rose promptly at 8:00.  This was to be the gala memorial and most of Spain’s top stage performers were on the bill and all were appearing out of gratitude to Paco de Andrés for the help and counsel that he had given them on their personal road to stardom.  With Jorge Blass as both emcee and magician, we spent the next seventy-five minutes being entertained by the likes of Jandro, Yunque, Nuel Galán and Juan Gurrea.  Outstanding!

Next was a dinner that was to be followed by a midnight cabaret.  The catering service at La Rambleta catered the dinner and it was the only weak point of the weekend.  Service was sloppy and inconsistent.  The food was of variable quality, but we all persevered and made our way through the meal.  While we were finishing our meal, the Seda Jazz Quintet took the stage and entertained us with a variety of musical stylings while we had our coffee.  The midnight cabaret started a bit early and that was when Susan and I took our leave of the day’s activities.  I needed to be at the theater at 9:00 AM for a sound and lighting check and that meant that I needed to be up at 7:00 so that I could be functional at 9:00 AM.

We arrived at La Rambleta a little before 9:00.  We were the first to arrive and the security guard accompanied us to the backstage area of the theater.  The theater at La Rambleta has close to 700 seats and since seating was not numbered for this gala, there was no way to judge how many seats had been sold by the online ticket seller, entradas.com.  Slowly but surely the other performers began to arrive and we started with lighting cues and sound checks.  To my dismay, I discovered that the wireless microphone that I had purchased on Friday was defective and I went into a mild panic.  Since I was one of the two emcees, it was essential that I have a working microphone.  The tech guys at La Rambleta came to my rescue and provided me with one of theirs.  I then set about preparing the effects that Sofi and I were to do.

Sofi and I had performed together in a school auditorium back in December.  Our audience that day was close to 100.  In an LA school, whose name I cannot recall, I performed for an audience of 125.  However, before yesterday I had never performed magic in a formal theater setting where there was the potential for seven hundred spectators.  This was to be an interesting experience.  Everyone is in his or her seats at 11:05 and the show is about to begin.

Sofi enters and welcomes everyone.  Our opening shtick is that she thinks that she is there to give an English lesson and has wandered on stage by mistake.  I then start calling out her name and enter on stage to find out what she thinks she is doing there.  I have my cell phone in hand.  It is gimmicked to produce flames.  I pretend to end my call by saying to the party on the other end of this call that I will convey their message.  This is a set up for a gag.  The Spanish verb apagar means to shut off something electronic.  It also means to put out a fire. I press the switch, the fire appears and I say, “Favor de apagar los móviles”.  It gets a big laugh, as well as applause.  The nerves settle and I am at home.

One by one the magicians take the stage and do their thing.  Mag JJ starts things off, followed by Selú and Nuel Galán.  G Alexander closes the show.  In between acts Sofi and I do our bits with a magic paper bag, rising wands and a card with dots on it.  Sofi gets to do a solo spot with an effect called Hippity Hop Rabbits.  I am supposed to do a solo spot with my dog puppet, but the show is running overly long and I give up my effect.  The show was scheduled to run 75 minutes and we were at 100 minutes with one act to go. G Alexander finishes to great applause, I take the stage and have all the performers come out and take a bow and announce that we will be in the theater lobby to greet our audience.  The theater lights go up and I discover that we were playing to a packed house.

On the way out of the performance space I was asked to pose for pictures and in the lobby I posed for pictures and signed autographs.  That was a new experience for me.  When things quiet down, I go backstage and pack up my gear and head for the bar downstairs for a well-deserved beer.  Pepe invites a group of us to go out for lunch and we enjoy a paella, along with several appetizers and he pays the bill.  Susan and I gather up my gear from Manolo’s trunk – Manolo had driven us to the restaurant – we hail a cab and head back home where we stayed for the remainder of the day.  We missed the last show of the 24 HORAS, but by then both Susan, the official photographer of the event, and I were completely done in. 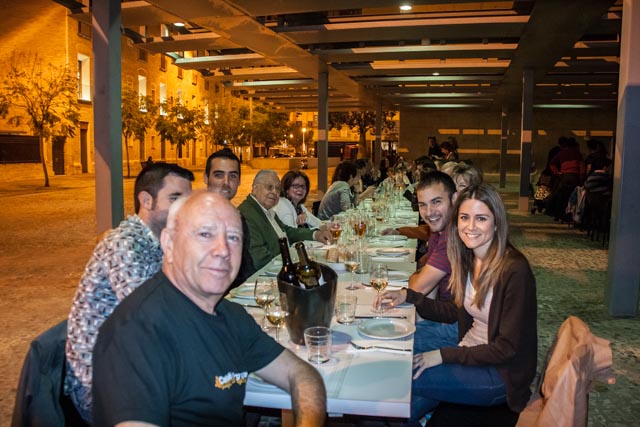 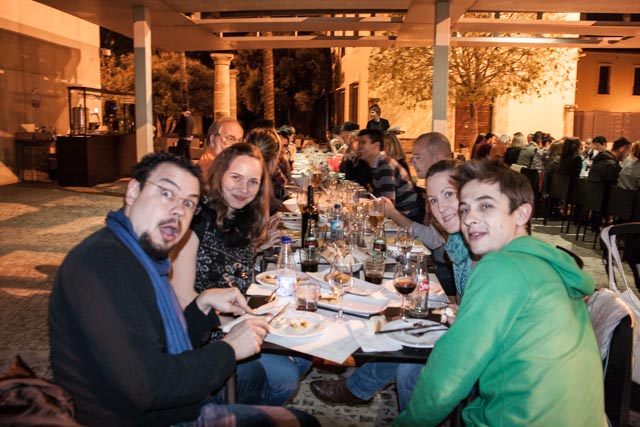 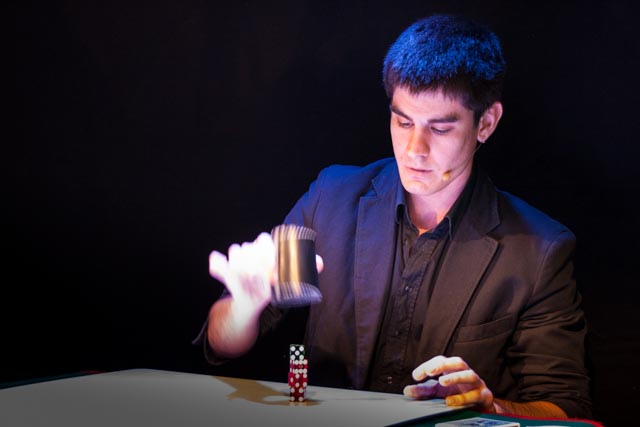 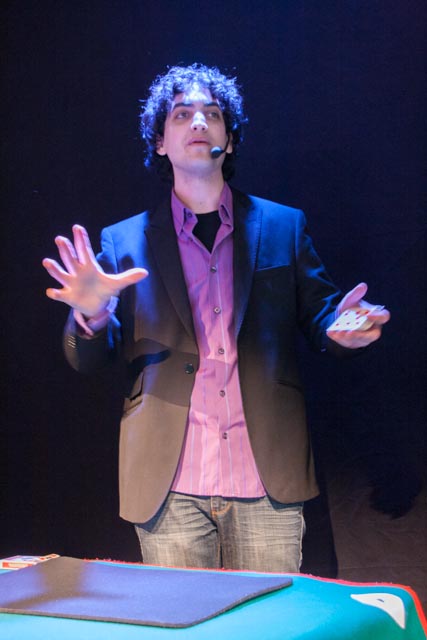 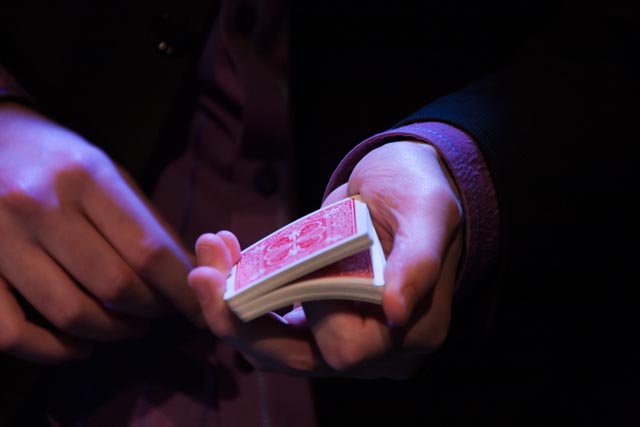 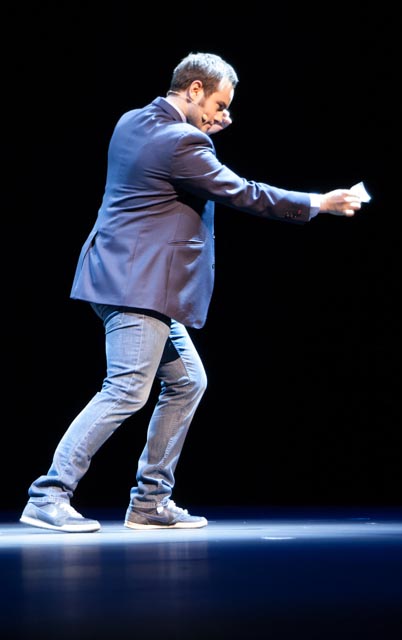 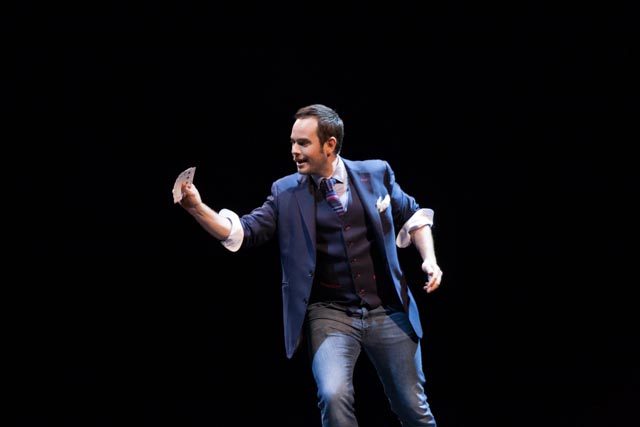 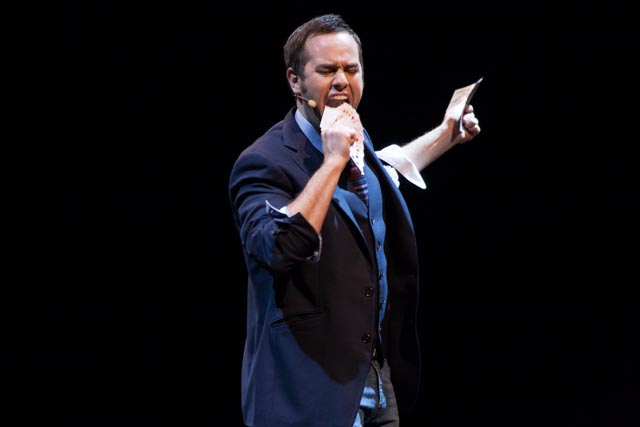 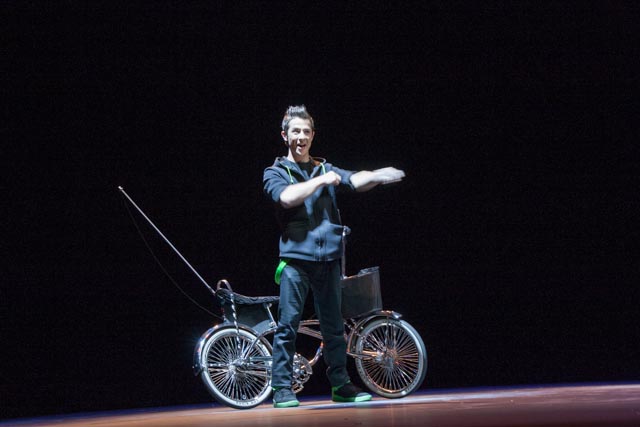 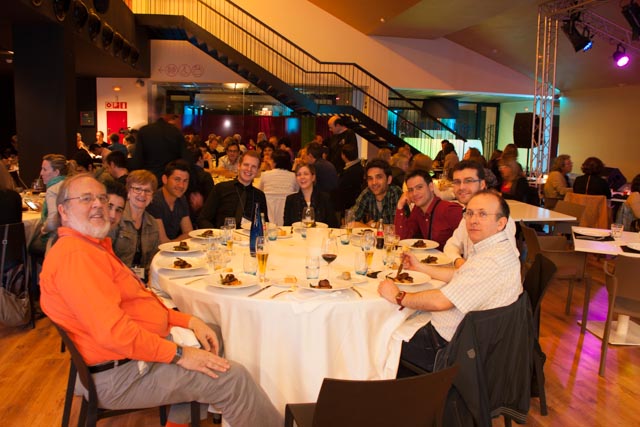 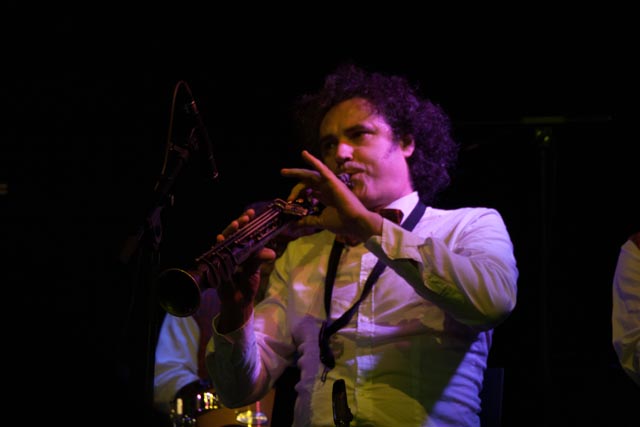 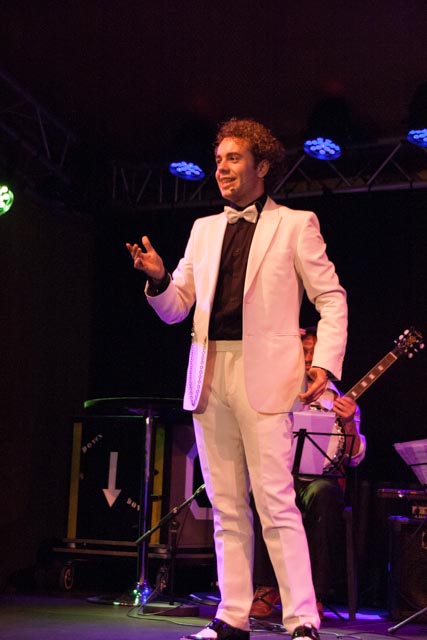 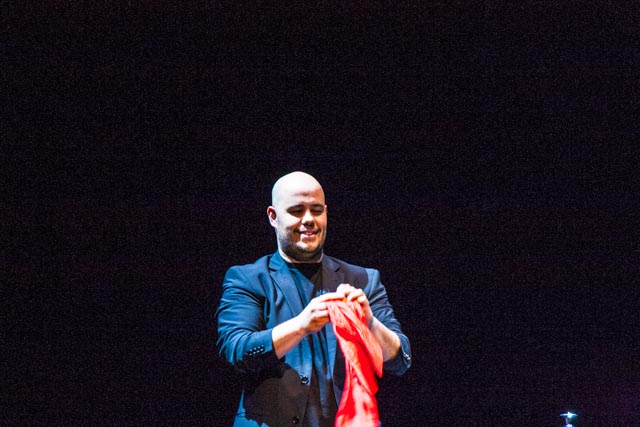 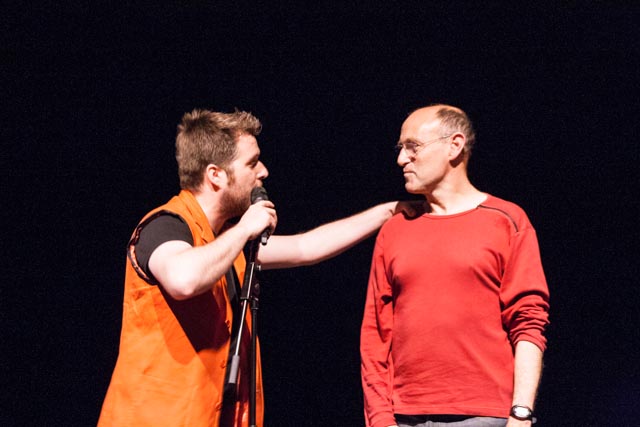 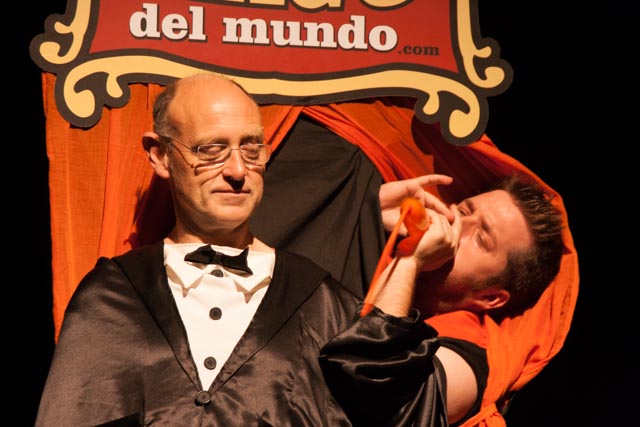 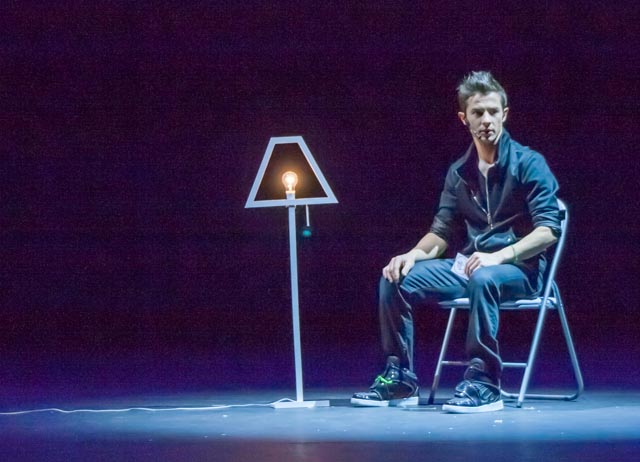 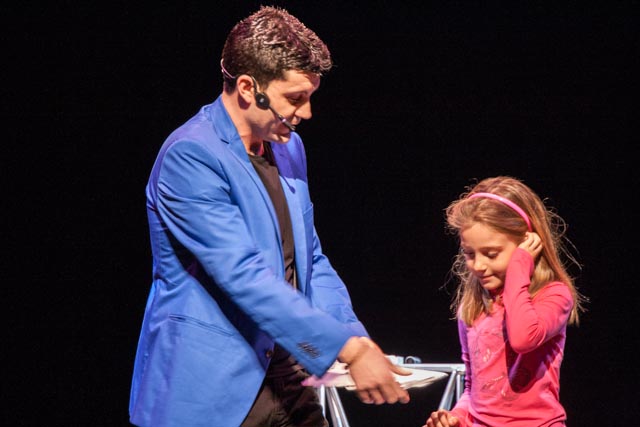 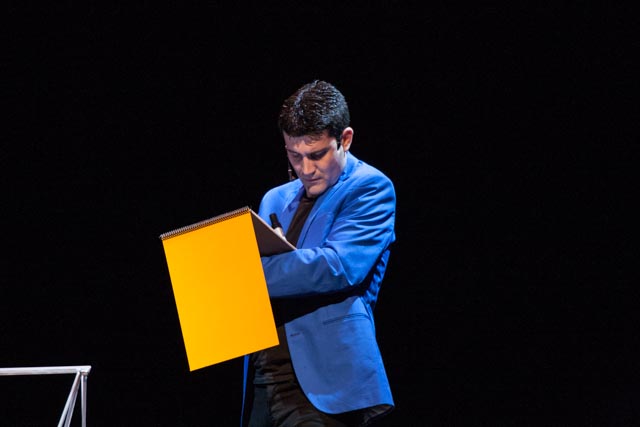 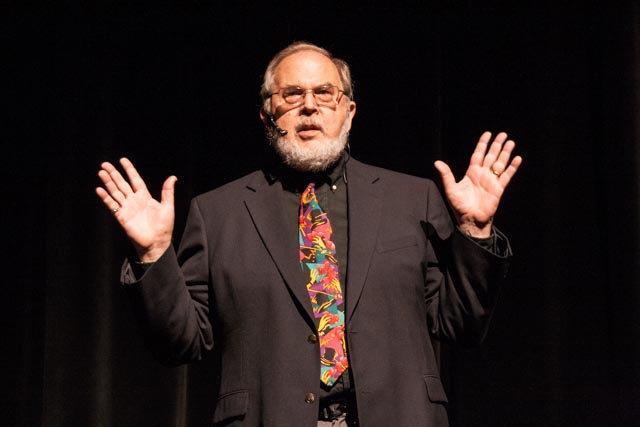 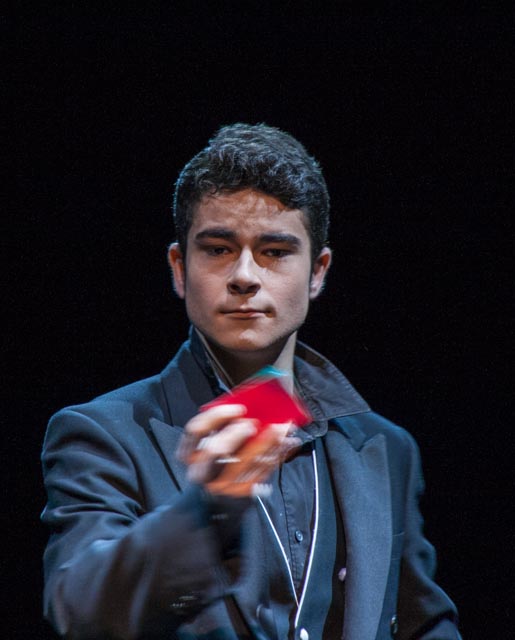 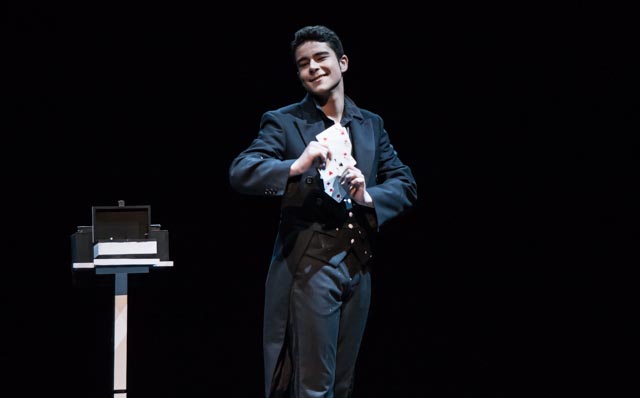 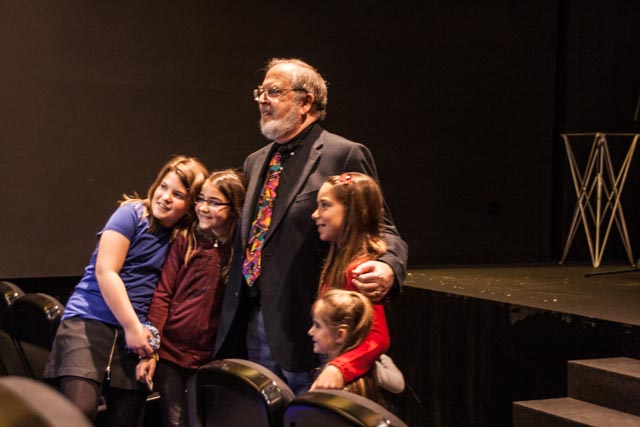