FALLA To Be Wise!

The good news is that there is enough soundproofing when you close the door midway down the hall to muffle the street noise sufficiently that one can sleep.  There was additional proof this morning when I woke up.  Upon opening the door I heard the band that was playing outside of our kitchen window.  Given the fact that Barón de Cárcer is a wide avenue, it seems that every nearby casal faller is marching up and down the street with its falleras and its accompanying band.  At one point I counted eight different groups making their way up and down the avenue.  By the way, the street is not closed to traffic, but if you are in a car today you must be at least half crazy.

The change in sidewalk traffic from Friday to yesterday was unbelievable.  There was so much foot traffic that it was very difficult to move.  Both sidewalks were filled with pedestrians and many of those on foot were walking on the street paying little or no attention to the beeping horns of the cards behind them.  Susan and I decided to take a look at some of the fallas and we would do so close to the time of the mascletá.  We left a little after 1:00 to see the falla Convento Jerusalén-Matemático Marzal, which as it turns out won first prize for the best classic falla. It is a block away from the train station and the street was mobbed almost to the point of being impassable.  While some of us were heading down the street to view the falla, there was a throng of people heading up the street on their way to the Plaza del Ayuntamiento. We finally got close enough for Susan to take some shots and then we headed out to Sueca to see a number of the fallas in that area.

Every large falla has a corresponding falla infantil, which is much smaller in size and much more approachable in terms of being able to take it all in.  Almost by definition, all the fallas strike a satirical note and the targets this year are Rita Barberá, the mayor of Valencia, Mariano Rajoy, the Prime Minister, the royal family and the bankers.  Spaniards, in general, are very unhappy with all the cuts that have been made to health and education with a concomitant rise in taxes.  In addition, many people have been evicted from their homes because of their inability to pay their mortgage.  By the way, if you are evicted from your home here in Spain not only lose your place to live because the bank will resell it, but you are still obligated to pay the mortgage on the place at a higher rate of interest.

A ruling from the European Union the other day has helped put a stop to a part of the process.  Up until now if you filed a complaint saying that the eviction was unjust for whatever reason you were still evicted.  If you won your case, you were paid compensation, but you still lost your house.  The new ruling prohibits eviction until the case has been settled in court.  The ruling was brought about by the petition of a number of social organizations.  People have not failed to notice the government has done absolutely nothing to put forth a solution and that is because all major political parties are in bed with the bankers and the banks.  So, while public money has been used to rescue the banks, the banks, in turn, have shown their gratitude by evicting the public.

When we finished viewing the fallas, we sat down at an outdoor table of a nearby bar and had a drink and a nibble.  When we thought it was safe, we headed back home.  There was still a goodly amount of foot traffic, but it did not take an excessive amount of time to get back home.  When we passed by the tent in front of our building, lunch was in progress and after lunch there were cheers and songs.  There is an incredible amount of bonding that goes on during fallas and from a very young age children identify with their casal and by extension with their city.  That creates strong ties to your neighborhood and your hometown and explains, to some degree, why Spaniards tend to stay put, rather than move from one part of the country to the other.  However, as the young leave the country in search of work, this may bring about a change.  Only time will tell.

We had planned to go out in the evening to see the falla at Na Jordana and have dinner at La Comisaría, but as 9:00 o’clock approached we were both rather tired out from our earlier activity so we decided to cancel our reservation and take the rest of our evening both slow and easy. 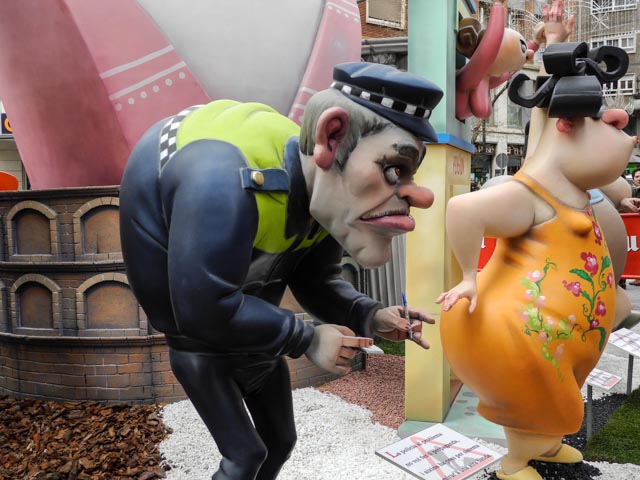 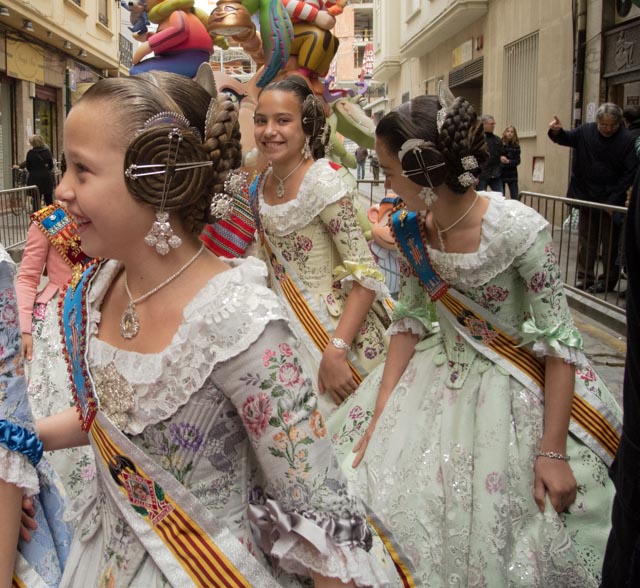 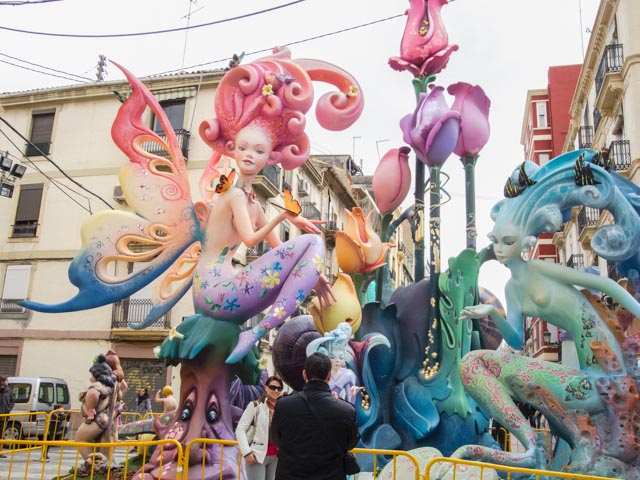 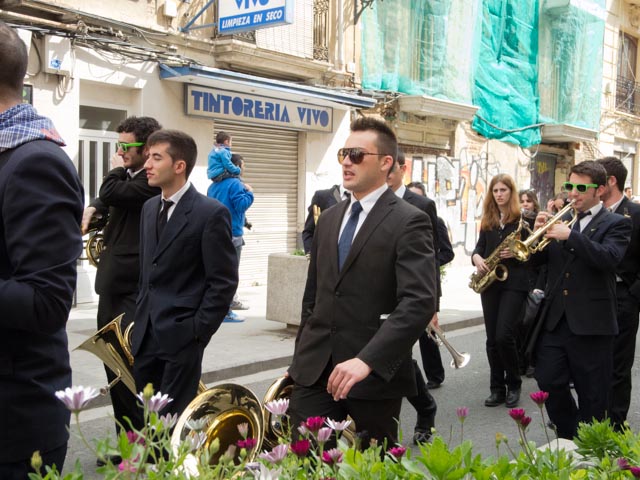 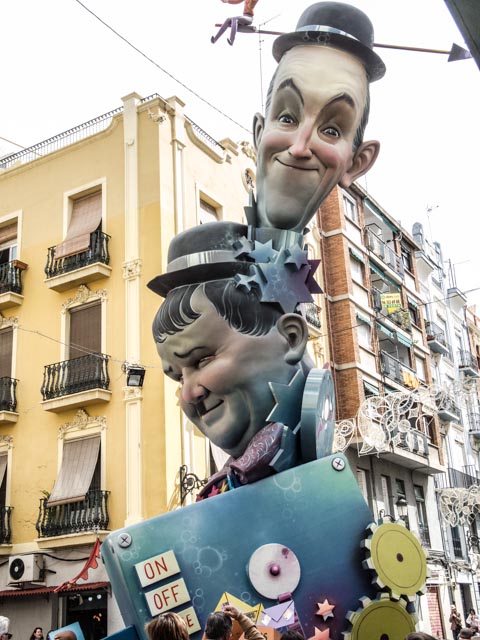 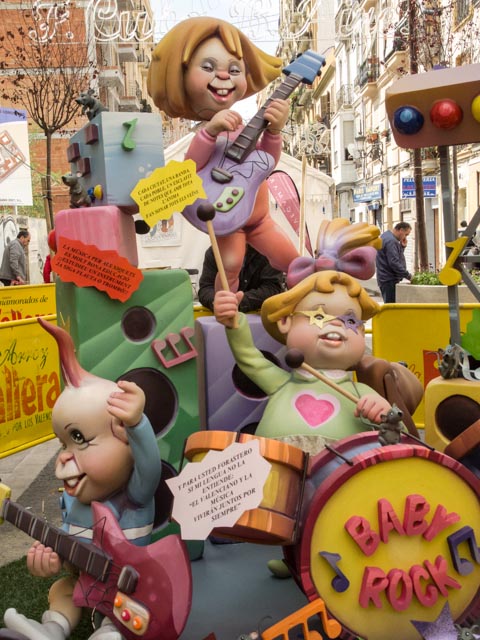 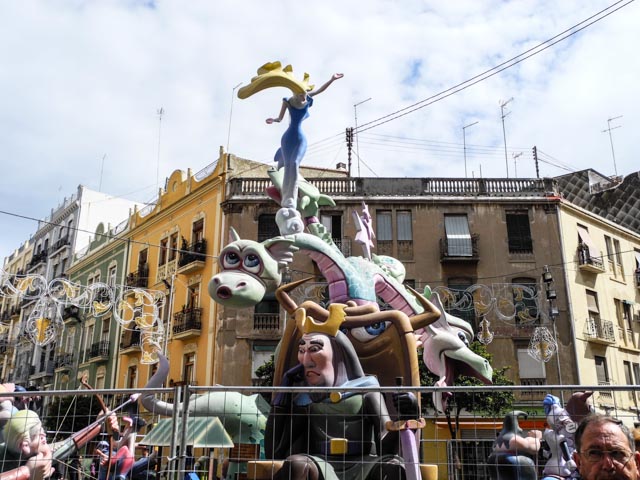 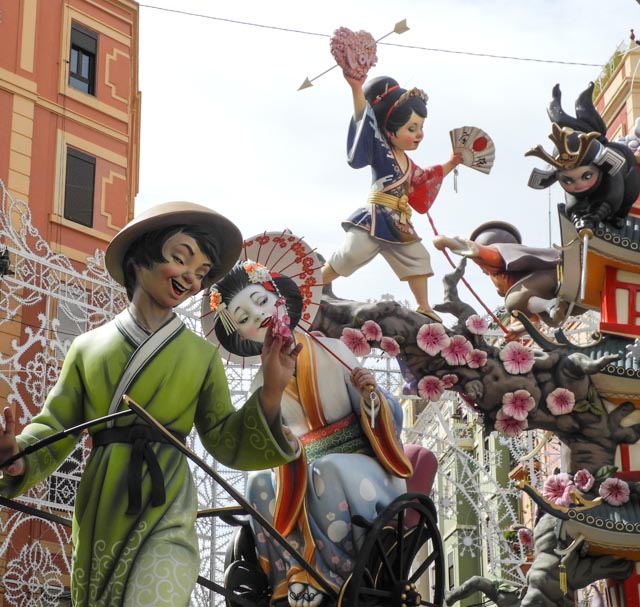 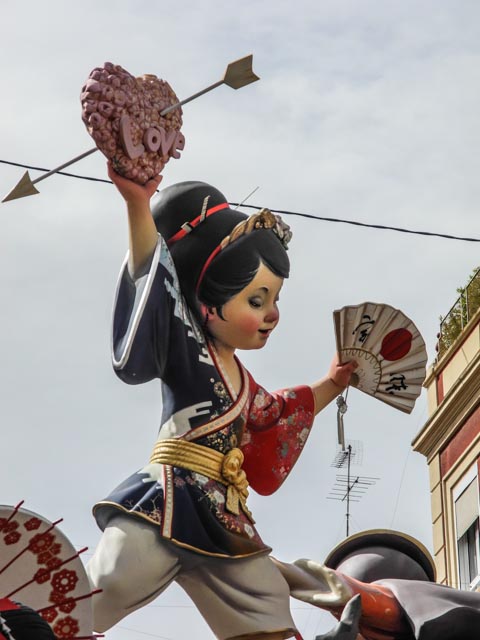 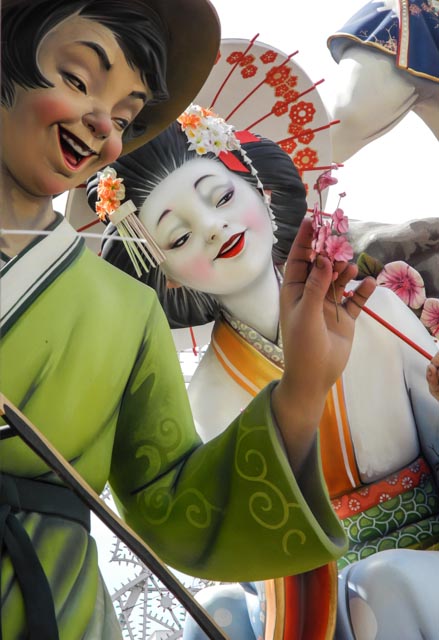 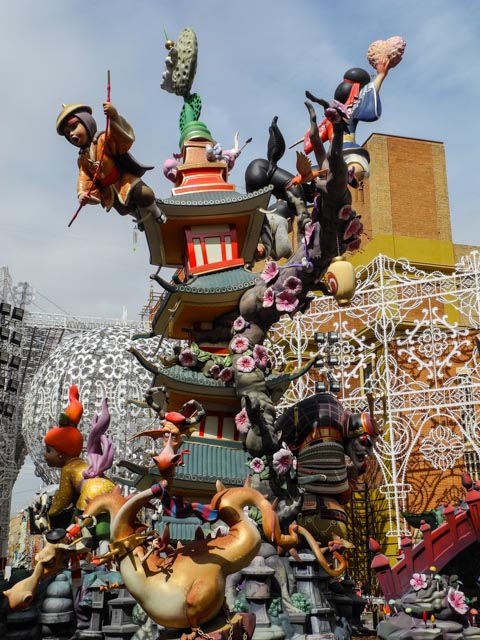 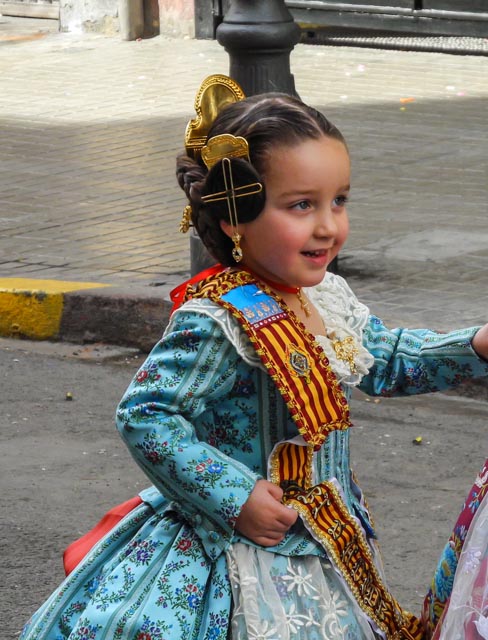 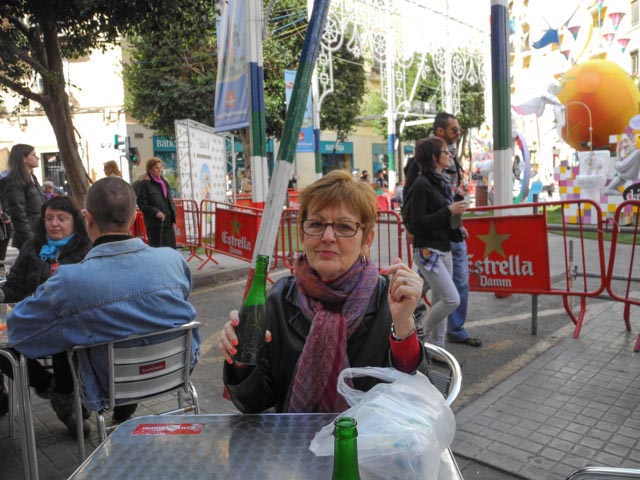 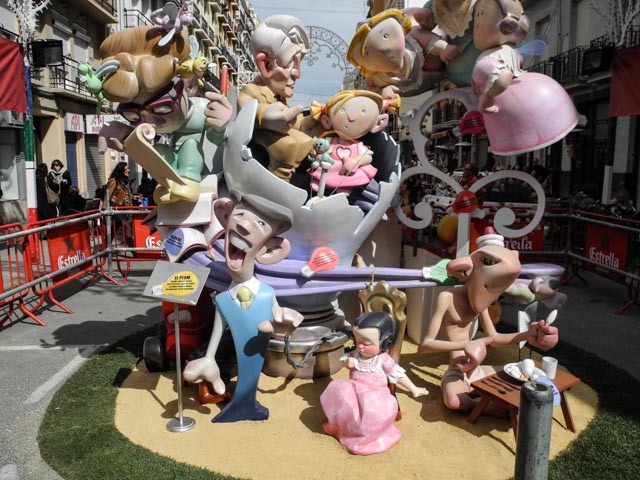 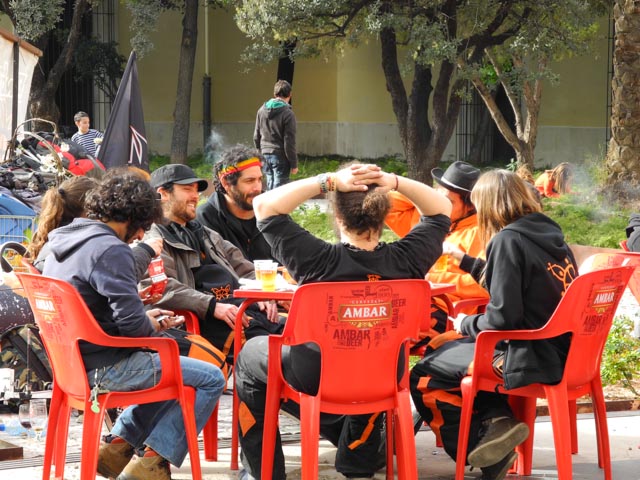 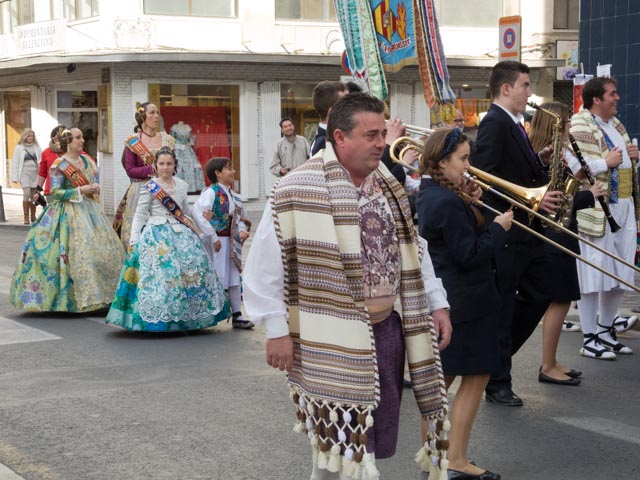 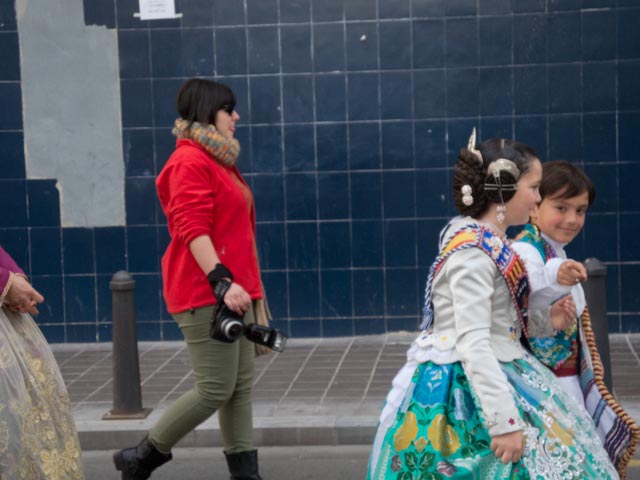 This entry was posted in Uncategorized and tagged Fallas, MartyKaplan, Valencia. Bookmark the permalink.