Posted on December 9, 2012 by martykaplan

It’s beginning to look a lot like Christmas here in Valencia.  The streets are lit with illuminated signs, there is a large electric Christmas tree in the Plaza del Ayuntamiento and all the store windows make it abundantly clear that Christmas is approaching.  Still and all, the important day for children here in Spain is not December 25th, but rather the 6th of January, which is called El Día de los Reyes Magos in the Spanish-speaking world.

We slept in yesterday morning and after breakfast Susan spent most of the day restoring old family photographs of her parents and grandparents.  I spent my time working on a list of effects that will be performed at my kids’ magic show the week of the 17th.  Monday I will visit the school to take a look at the classroom and determine where the performance space will be and make a firm decision about the time and date with the classroom teacher.  I continue to search for appropriate music for the final effect, which is a butterfly snowstorm.  Also, given the fact that I will be doing this effect with Sofi we will need to do a bit of choreography in order to make the effect play well.  When I say choreography I am not talking about dancing, but rather positioning on stage, who begins, when does person two come in and how does the effect end.

Given the fact that our things arrive on Tuesday that means that my two magic tables will be available to me, as well as my dog puppet.  Still and all, even with all the choices I have available, I realized that I was still in need of a suitcase table that will allow me to transport material and also provide me with a performing surface.  All effects can be stored on the shelves of suitcase table and that makes them easily accessible as opposed to having to place them on a variety of surfaces around the classroom.  I ordered one yesterday and it should be here on Tuesday.

On Thursday Susan had gone to a recently opened restaurant in the Russafa neighborhood called Anerea.  She had gone there after the concert with Jim, Yun, Jaime and Inma.  She enjoyed the experience so much that she suggested that we have dinner there last night.  We hopped a cab and arrived in plenty of time for our 9:30 reservation.

Anerea opened in mid-September and the chef du cuisine is Josep Quintana whose former restaurant – Restaurante Torrijos – closed in spite of its having earned a Michelin star.  The restaurant is named after his four-year old daughter Nerea.  It is a small space that seats about thirty diners.  The restaurant feels very cozy and part of that feeling is due to the size of the space, but it also comes from the brick and wood of the walls.  The kitchen is quite small and so is the wine list.  There are no paper menus, but rather there is a chalkboard that lists the appetizers, entrees and desserts of the day.  Diners get a fuller explanation of the dishes from the server.

There are two differently priced menus.  The first consists of a choice of three appetizers that are shared by the table, two main course options and three dessert choices.  That menu costs 24.50 Euros per person.  The second menu offers a choice of four appetizers and the addition of a cheese plate that precedes the dessert.  That menu costs 34.50 Euros per person.  We chose the 24.50 Euro menu.

Our server, Oscar, helped make our evening memorable.  He carefully explained to us all our options, describing each dish down to the last detail and even chose our wine for us.  He was very attentive throughout the meal and our wine glasses were never empty.

We began with an amuse bouche of sobresada on a triangle of toast.  It was great way to start.  Then the parade of appetizers began.  There was a tuna tartare

Served with what looks like wasabi, but is really avocado.  Next came a dish of faux morcilla, huevas and shaved artichoke.  Morcilla, more commonly known as blood pudding is a mixture of blood, rice and spices.  This version is made from sepia, squid ink and rice.  If you did not know the ingredients, you would swear it is the morcilla that one has come to know and love.  Huevas are fish roe that are the size of your average lima bean.  The ingredients marry perfectly.  Lastly we had a timbale of green beans topped with a carpaccio of shrimp and foie gras that were caramelized.  All three appetizers were stellar.

Our main course was a solomillo de cerdo con patatas.  The pork was served rare, along with chips and a sauce that had the consistency of mayonnaise, but was not mayonnaise.  For dessert we chose a combination of a coca (pound cake), pumpkin and the best pistachio ice cream I have ever tasted.  It should be noted here that pistachio is my favorite ice cream flavor.  Our other dessert choice was a sopa de chocolate con pera.  It was quite tasty, but we clearly preferred the other dessert.  We finished the meal with coffee and a chupito.

After our meal we chatted a bit with Oscar and we then proceeded to make our way home.  It was midnight when we walked through the door.  We stayed up until 1:00 to let our meal digest and then it was lights out. 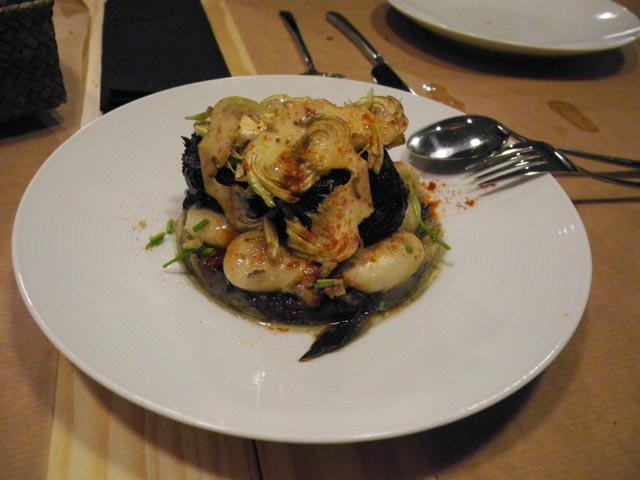 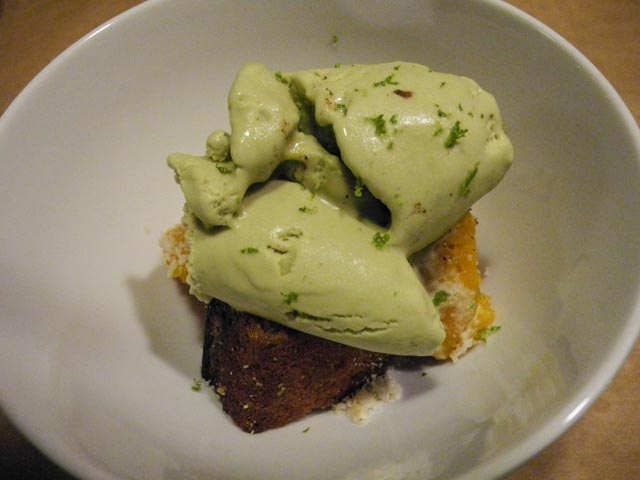 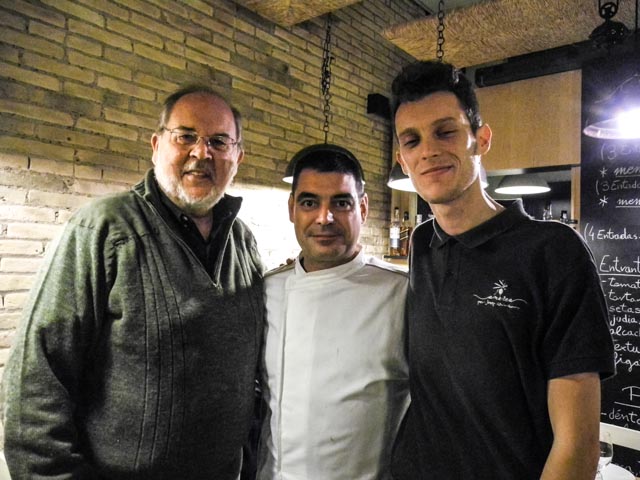