Posted on October 9, 2012 by martykaplan

We are back in Valencia after a whirlwind weekend in Madrid.  On Saturday we boarded the AVE at 2:10 and we pulled into Atocha station some ninety minutes later.  From the station we took a cab to the Westin Palace Hotel and unpacked our few belongings.  We then headed to the Plaza de Santa Ana, found a table outdoors and had a rather late lunch.  After lunch we headed back to the hotel to rest up a bit before we headed out to the Teatro Compac to see Jorge Blass in his latest creation, Birlibirloque http://www.youtube.com/watch?v=1zdA68U47Nc.

The curtain was at 8:30, but we decided to leave a bit early to give ourselves sufficient time to walk there.  The Palace Hotel is across the street from the Congreso de Diputados, which has been the site of several protests in recent weeks.  The police are out in force to assure that there are no impromptu demonstrations and there are a number barriers ready to be put in place should the need arise.  A number of streets have been closed off making access to the Congreso more difficult.  In spite of it all, the streets were jammed with madrileños in search of a night’s entertainment and what should have been a fifteen-minute walk, turned into a twenty-five minute crawl.

We reached the theater a little before 8:00 and stopped off at the box office where Jorge had left us a couple of tickets.  He was kind enough to have us seated in the third and fourth seats of the second row.  We took our seats and eagerly waited for the performance to begin.  It promised to be very entertaining because this show is a masterful combination of magic and music.  The music for the show, all original, was written and performed by Mastretta.

I met Jorge Blass some eleven years ago.  At that time I was spending a few days at the home of a friend in Benalmádena in the south of Spain.  While there I learned of a show that was taking place in Málaga.  The show was called Ja, Je, Ji, Jo, Ju and it was a magic show that was aimed at children and it was a benefit for the foundation that brings magic and clowning to children in hospitals throughout Spain.  After the show I was invited to grab a bite to eat with the performers and that is where I met both Jorge and Dani DaOrtiz.  I have caught up with Jorge numerous times since then.  For a while he did a two-week stint at The Magic Castle in Hollywood and one year he spent a major amount of time in LA studying acting.

The 8:30 show was the second one of the day for Jorge.  His first show had ended at 7:30and here he was an hour later ready to do it again.  The show was fantastic with a number of classic stage effects in modern dress.  I am constantly amazed at Jorge’s ability to connect with his audience.  Part of that success is his personality and part of it has to do with the way he scripts the show so that there is maximum audience involvement.  I won’t bother to list the effects that he did, but each one was more amazing than the previous one.  When the show was over, we met briefly with Jorge and we presented with a butterfly tie that seemed appropriate given the theme of his new show.

As we made our way back to the hotel the streets were still very crowded.  We decided to stop off at a favorite bar of ours that is near the hotel.  It is called Cervantes and it has some of the best tapas around.  Susan and I had to wait a bit for a table, but it was worth the wait.  He shared some pulpo a la gallega and we then ordered three tostas, which are essentially canapés served on a slice of toasted baguette.  We opted for one with salmon, one with shrimp in aioli and one with a thin slice of sirloin steak.  Delicious!!!  We stayed up a while to let out late supper digest and it was a bit after 1:00 when we finally went to bed.

When we woke up on Sunday, it was close to 11:00 o’clock.  We showered and dressed and went to a nearby café to get a cup of coffee and a small bite, small because Ramón and Juan Diego were coming by the hotel to take us out to lunch at 1:30.  Because of the traffic they arrived a bit late and after they parked the car we decided to walk to a restaurant called Public, which is just off the Gran Vía.  Here is a link to their website http://www.restaurantpublic.com/ .

We had a very leisurely and lovely meal and we shared everything except for dessert.  We enjoyed a risotto with foie, a salad with orange slices and prawns, langoustines with salt and pepper, goat cheese in a red pepper marmalade with caramelized onions and some anchovy canapés.  Our four desserts were their version of apple pie, torrija ­– think French Toast – with vanilla ice cream, apple compote with a scoop of cinnamon ice cream and a lovely concoction that they call the dessert that you eat from bottom to top.  WE finished the meal with coffee and by the time we made it back to the hotel it was 5:00 o’clock. We stayed in for the rest of the evening, although Susan did slip out for a cup of coffee.  I flaked out around 10:30 and Susan finally came to bed around 12:30.

Yesterday we slept in a bit and then got dressed and had breakfast at a little bar a few blocks away from the hotel.  After breakfast we returned to the hotel, packed our bags and had them stored for us while we decided to take a walk.  We gave some thought about going to the Gauguin exhibit at the Thyssen Museum, but it seems that the King and Queen were visiting the museum and the museum was closed to the public.  That being the case we decided to walk to the Estudio Internacional Sampere and visit with our friends there, many of whom we have known since 1974.  It was a brief visit and afterwards we caught a cab back to the hotel to pick up our bags and continued on to the train station to catch the AVE back to Valencia.

There was a CIVAC meeting last night, but it was sparsely attended because today is a holiday in Valencia as is Friday.  After spending an hour or so with the magicians I walked back home.  On my way I passed by Carosel and to my surprise it was open.  Normally it is closed on Mondays, but since today is a holiday they will be closed.  I caught up with Jordi and we chatted for a while over a glass of wine and we were later joined by a couple of friends of his.  I schmoozed with them until 10:30 when I made my way back home.  Bedtime was little after midnight. 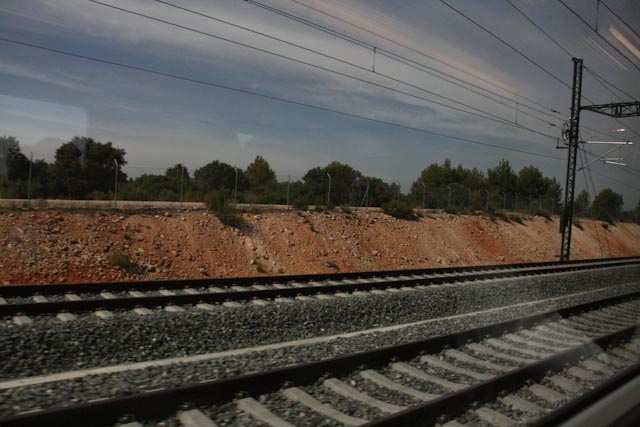 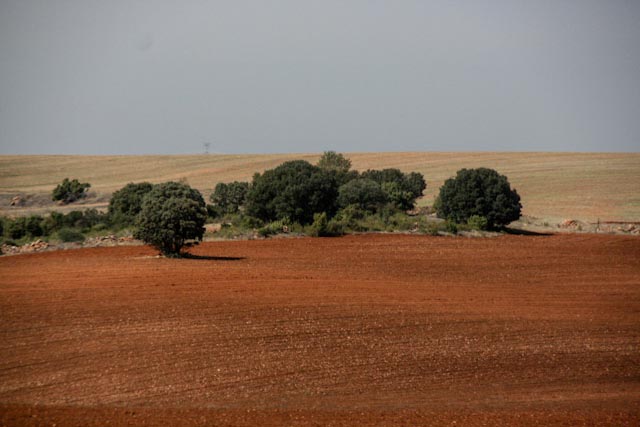 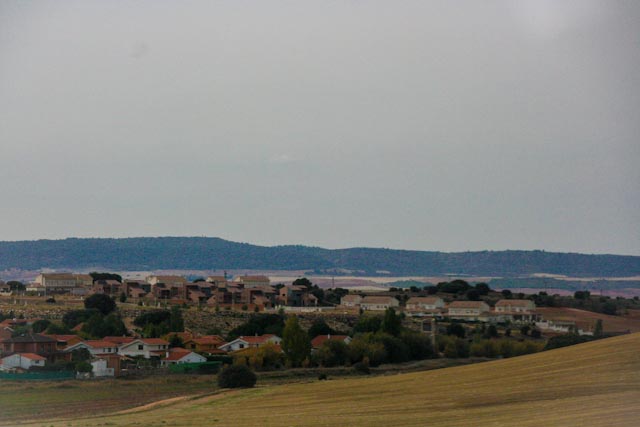 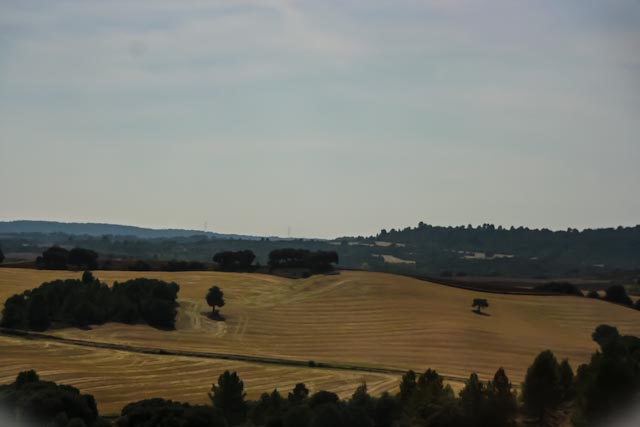 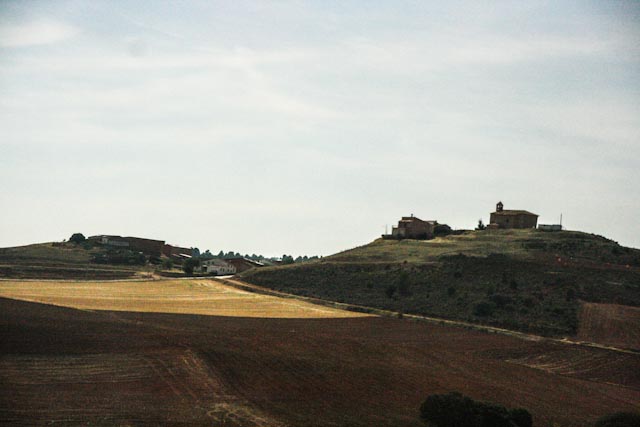 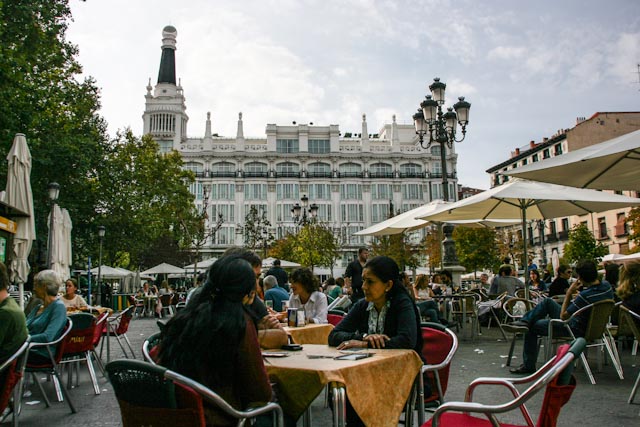 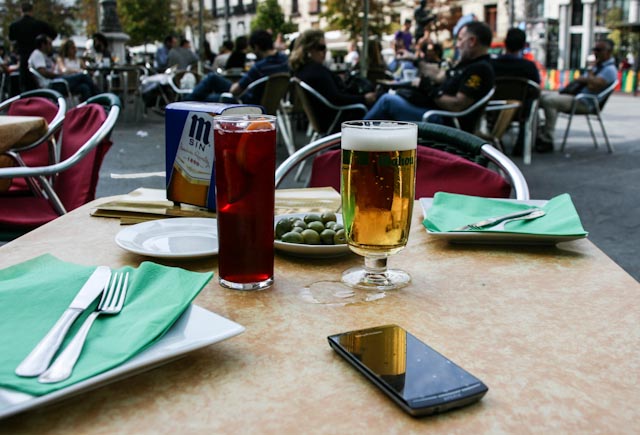 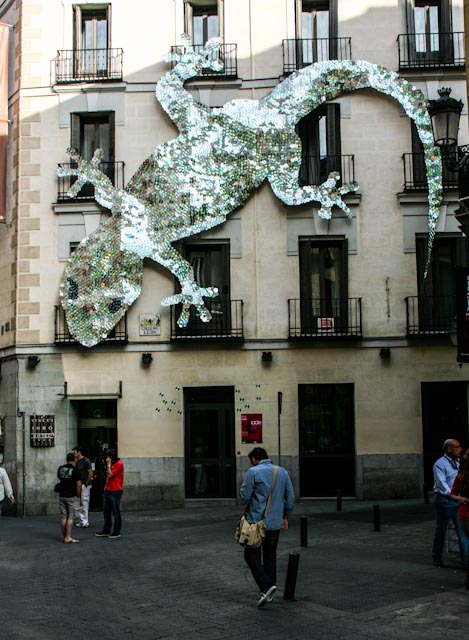 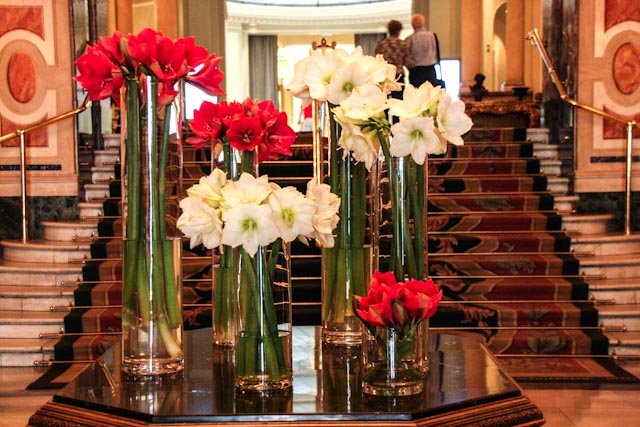 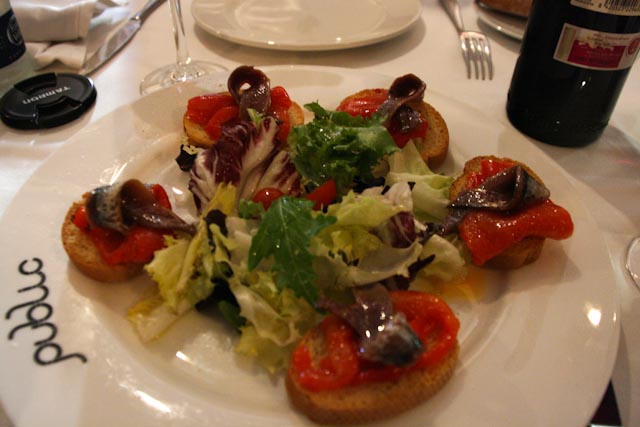 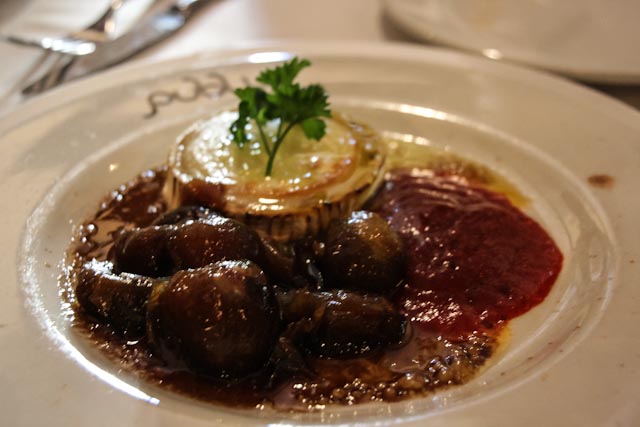 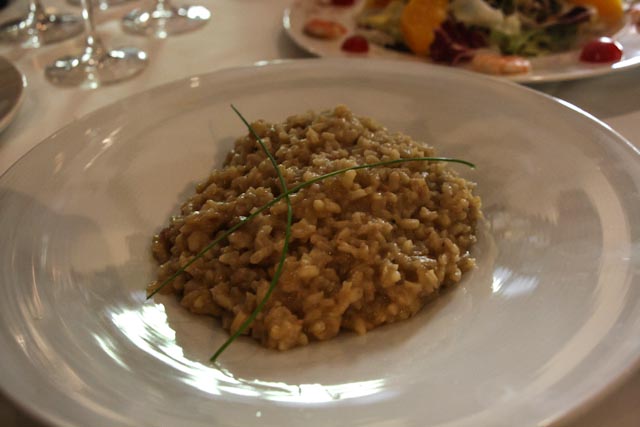 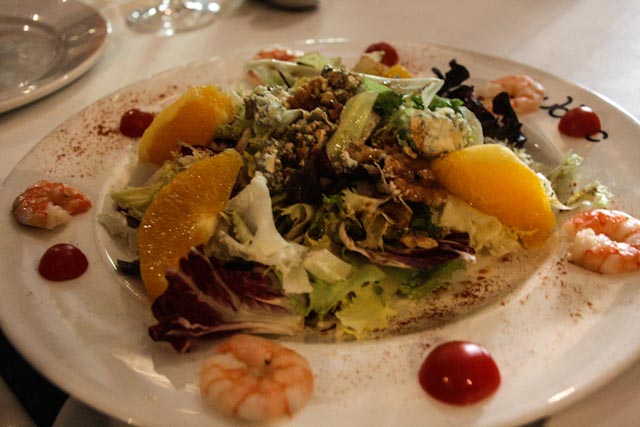 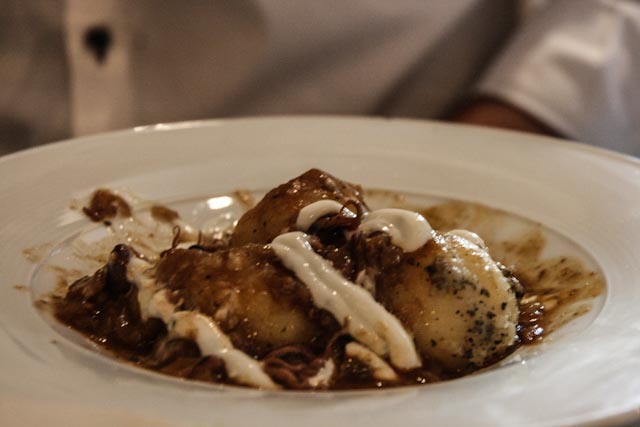 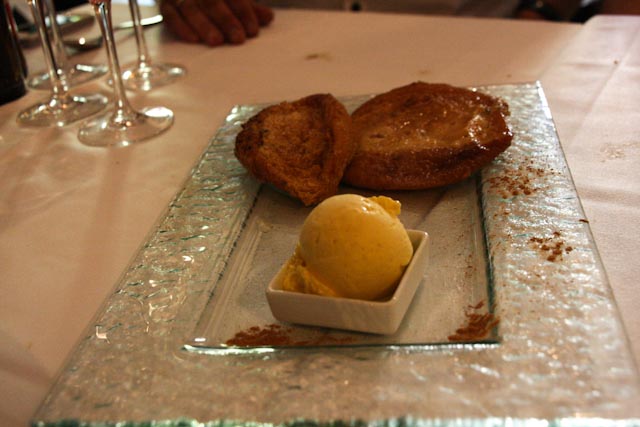 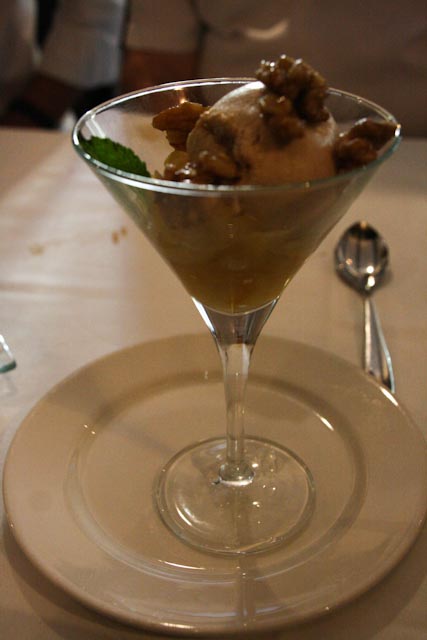 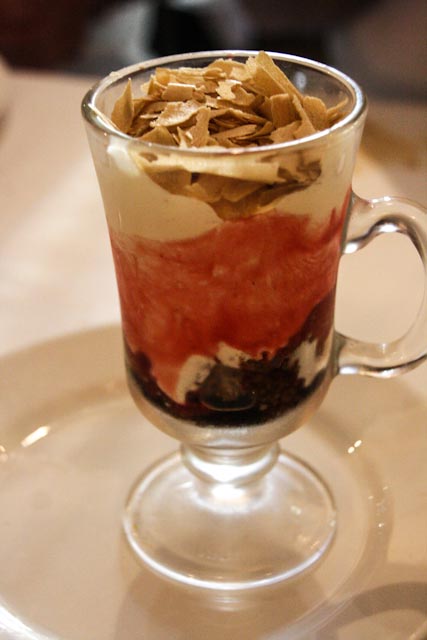 The desset you eat from bottom to top! 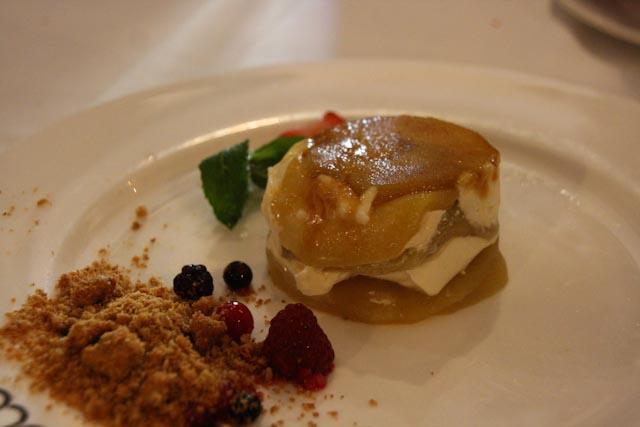 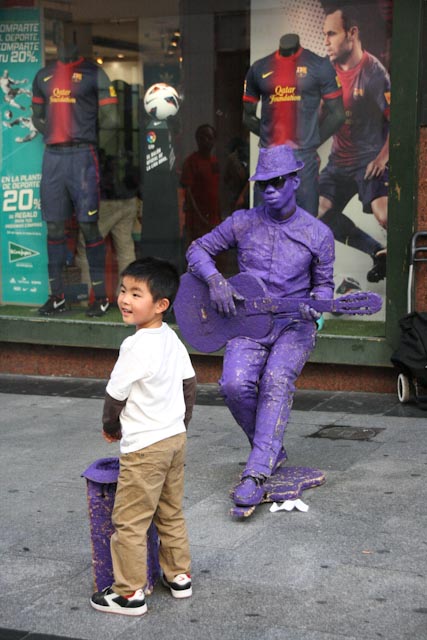 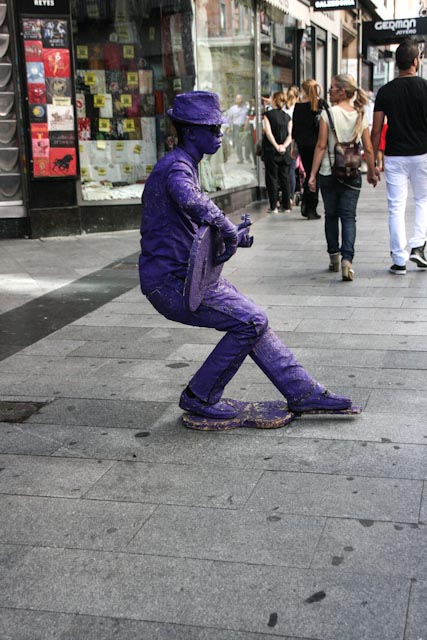 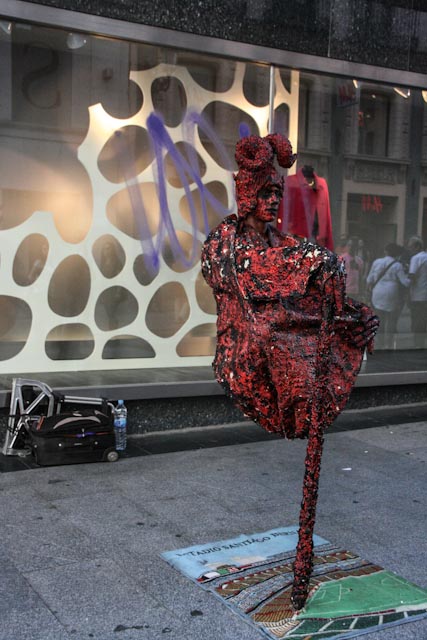