Surprises Of The Pleasant Kind

Posted on February 1, 2012 by martykaplan

RABBIT, RABBIT!  That is what everyone at Foxcroft used to say on the first day of every month we were at school. It is a tradition that has its origins in Great Britain and supposedly if you say it in the first day of the month, it will bring you good luck the entire month.  Here’s hoping.

Yesterday both Susan and I exercised at home and by the time I had finished it was well after 1:30.  I abandoned the idea of doing cardio at the gym and we decided that we would program in a long walk during the day that would, in essence, be our cardio.  We decided that we would head over to Cánovas again and see if one of the restaurants that had been recommended to us, Rincón de Roberto, was open on Tuesdays for lunch.  It took us a good half hour to get there and it was indeed open.  The restaurant was not very crowded, but we knew that we would find good things to eat here.

We started our meal with some baby artichokes that had been sliced thin and cooked on the flattop with some olive oils and salt.  The dish was a simple as things can get and absolutely delicious.  Our main course was a plate for two of sliced tenderloin cooked with ajos tiernos, which are the tops of the green onion plant, and served with potatoes and green beans.  The meat was both tender and tasty.  We passed on dessert and had coffee instead.

On our way back home we stopped off at El Corte Inglés and I made a very fortuitous mistake.  The Corte Inglés occupies three separate buildings on Calle Colón.  Each of them carries different items and inevitably I am told that what I am looking for is at the Corte Inglés down the block.  Today I was looking for a warm winter coat that could be worn with a nice pair of pants.  As we rode up the escalator, it became clear when we reached the top floor that the men’s clothing department was in the store down the block.  However, the “bargain” section was located here and it included items from just about all of the stores.  I found a great-looking black woolen coat that was on sale.  It was close to half price and it fit perfectly.  Since it promises to get down to the low 30’s and the high 20’s the next few nights I will be well equipped to deal with the cold.

We continued on our way and Susan was jonesing for an ice cream.  We knew that Linares was not an option, but we had enjoyed the ice cream that was served up at a small place close to the Lys Theaters.  We walked by and it was closed.  We decided to give a restaurant called Bertal that is located in the Plaza de la Reina a try.  Unfortunately for us it was open.  It was some of the crappiest ice cram we have tasted here in Valencia.  A return visit will not be part of our future program.  It was a little after 6:00 when we got home.

An hour later we were back on the street on our way to the Cines Yelmo.  I really wanted to see the animated film, Arrugas, and I decided that yesterday would be the best time to do that.  It turns out that the film is Spanish, not Argentinean as I had thought.  The trailer features Miguel, who is one of the two protagonists of the story, and Miguel is from Argentina and so is his accent.  That is why I thought the film was Argentinean.  It is a charming film that charts the lives of a number of people who inhabit an old age home.  It is a film that quickly draws you in and makes you laugh and makes you cry.  Above all, it makes you think.

On our way home we decided to stop at the new restaurant, El Salatën that had opened on Quart a couple of weeks ago.  Here is a link to their page http://elsalaten.es/wordpress/.  We tried three dishes off the menu.  We began with an ensaladilla de colores that was made with purple potato, carrot, tuna and green beans.  It was absolutely delicious.  Next came a plate with four buñuelos de bacalao, which are essentially cod fritters.  They were served with a romesco sauce.  They were excellent.  Our last tapa was a plate of eight shrimp that had been cooked on the flattop.  They were fresh and tasty and smelled of the sea.  This is one place that deserves a return visit and that will happen soon.

Once we got home, we called Rachel via FaceTime and caught her between conference calls.  She was having a busy day and was hoping to be able to escape this evening to go and see a movie.  Having purchased the graphic novel that was the basis for Arrugas I decided to take the cellophane off the book and take a look to see how closely the movie followed the book.  When I opened the book I was surprised to discover that there was a CD inside with the original soundtrack of the movie.  Given the fact that that the package cost 15 Euros, it truly turned out to be a great bargain.  We read for a bit and it was close to 1:00 when we turned off the lights. 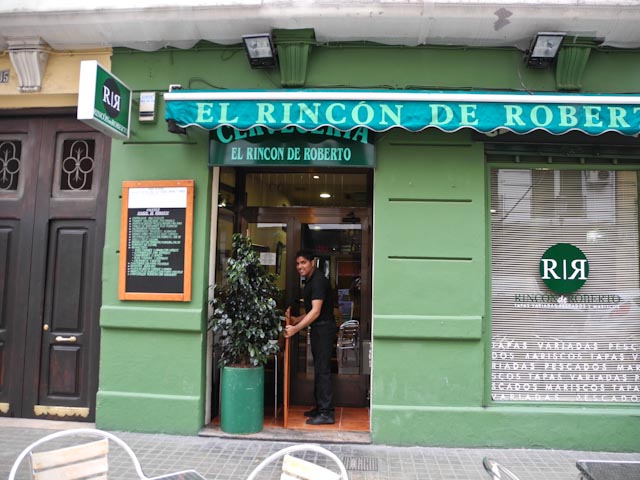 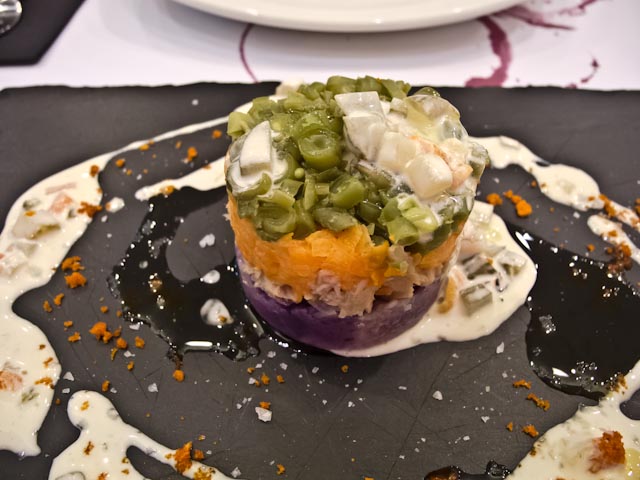 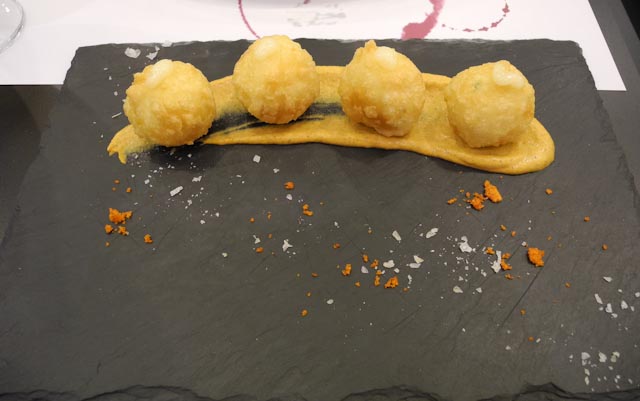