Happy Thanksgiving!  The turkey is in the oven and in another five hours the guests will have arrived and we will have begun the task of stuffing ourselves.  Today is the second consecutive day of sunshine and that means that none of our guests will have to avoid the raindrops on their way to our place.

Although the weather forecast called for rain yesterday, it turned out to be a sunny day.  We left the house early to make our way to the market to pick up the turkey that Cristina had ordered for us.  On our way to the market we made a stop at La Masía, a store that sells a variety of goods for the kitchen and bath among other things, and we purchased a rolling shopping cart so that, in the future, we could roll our purchases home instead of schlepping them long distances.  There were so many choices to make – 2 wheels or 4 wheels, small medium or large, collapsible or not?  We opted for a medium size blue 2 wheeler that was not collapsible.  We then made our way to the Mercado Central.

As soon as she saw us Cristina opened the fridge at her stall and took out the turkey.  In the space of a minute Mr. Turkey was resting comfortably in the confines of our new two-wheeler.  Navigating the narrow sidewalks of Valencia with the cart reminded me of wheeling Susan around in the wheelchair when she had suffered her ankle sprain.  One has to study one’s route carefully in order to make sure that you and your cart can get by and avoid streets that are badly in need of repair or situations where you and your cart can’t get by.  However, under the heading of life’s challenges, I guess this would go far down on the list.

Susan spent most of the morning and part of the afternoon getting things ready for today’s celebratory meal.  Sweet potatoes, stuffing, sage butter, and apricot glaze were some of the items that got checked off the list of things-to-do.  I took advantage of the time to make a run to Mercadona and pick up several things that we would need in order to complete the preparation of today’s meal.  I made a second run to Opencor to pick up a bottle of Chinchón (an anise liqueur) in case someone wanted an after dinner drink.  On my way to Opencor I made a stop at Café Poeta to say hello to Begonia and Ricardo.  I had sent them a Route 66 sign in October and I wanted to make sure that it had reached its destination.  Thankfully it had and they thanked me profusely. We talked about having a paella at their house in the near future and they promised to take us to some of the casals during Fallas so that we could have a close look at all that goes on during this celebration. A casal is a physical space where each group who builds a falla gathers to eat together, plan and party.  I thanked them and made it over to Opencor and bought my bottle of Chinchón.

While Susan continued the preparations for today’s meal, I spent a goodly amount of time on the computer working on the Magic Agora project.  I worked on translating my resume, which has now been posted on the website along with my photo and proofreading a number of articles that are to be posted on the website.  http://magicagora.com/category/teachers/martin-kaplan-en/?lang=en I have proofread or translated everything on the site that appears in English.  By the time we were both finishing up our respective tasks it was close to 3:00 o’clock.  We decided that lunch at A Nou would be a good idea.

Once again we opted for the menú del día and were not disappointed.  Yesterday’s appetizers included a pumpkin soup, a salad with pieces of apple and ham, and a hard boiled egg that was filled with a mixture of mashed potato and salt cod, which is often called a brandade.  For our main course we chose an arroz meloso con gambas y alcachofas (rice with shrimp and artichokes).  For dessert we had some homemade membrillo accompanied by a small scoop of vanilla ice cream.  Membrillo is the Spanish name for quince paste that is usually commercially available in a jellied form.  The membrillo we had was in sauce form and it mated exquisitely with the ice cream.  We both had a coffee and headed back home.

At 5:30 we hopped a cab and headed to our lawyer’s office.  His assistant had stood in line twice at the Comisaría de Policía in hopes of getting us a number that would guarantee us an appointment to get our tarjeta de identidad.  She had been unsuccessful both times.  We would now have to get in line early and wait patiently until the doors open, get a number and wait around for our appointment or, if we end up with a number that indicates an afternoon appointment will be ours, return later in the day.  Our plan is to be in line at 7:30 AM on Friday and wait until the doors open at 9:30 and get our number.  This will be the last step in the residence visa process and our visa will be good for a year, needing to be renewed next November.  The renewal is November of 2012 will be good for two years.  We were given the necessary documents, paid our last installment to the lawyer and shook hands and thanked him for all his efforts on our behalf.  He did spend a lot of time on our case and he most certainly earned his fee.

On the way back from the lawyer’s office we stopped of at a bodega so Susan could purchase a bottle of her favorite gin, Tan’s, and we continued on our way.  Stop number two was at Sefora to pick up some make-up.  Stop number three was at the Nespresso store to pick up some coffee.  Stop number four was at The Ginger Loft to say hello to Mike and chat a bit.  Stop number five was at Linares for our first gelato of this trip.  Our last stop was at our place where we collapsed into the nearest chair.

It had been a very busy day and so we spent the rest of our evening either reading or watching the cooking channel.  We had a very light supper and by 11:00 we were under the covers hoping that sleep would come soon.  The good news is that it did.

Marty and the blue shopping cart 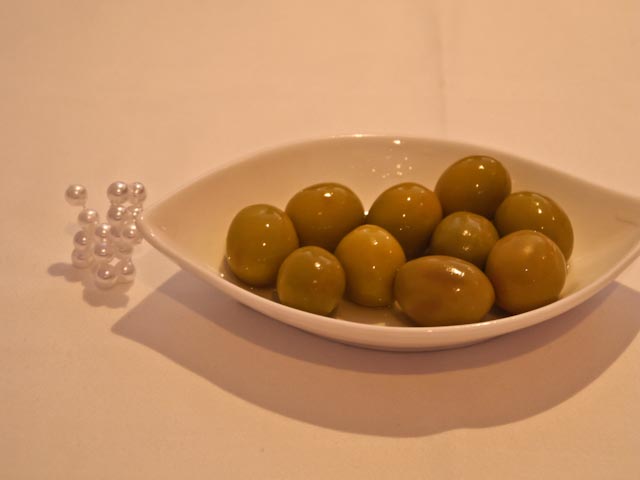 Olive appetizer to go along with our wine

Today's trio of appetizers at A Nou