We are up before nine on Monday and by the time we get it all together it is close to 11:00 and he head out for our morning coffee and croissant.  After that, we head for la Plaza de Callao in search of new memory cards for the two point and shoot cameras that we have.  We are to meet a couple of old friends for lunch.  We catch up with Ramón and Juan Diego in front of Telefónica and make our way to a lovely little restaurant called Divina and we have an enjoyable lunch. Here is a link to their website http://www.divinalacocina.com/mainEN.html

I have known Ramón since April of 1990.  I met Ramón the same day that I met Antonio.  Ramón is now a full time magician.  His professional name is Riversson and he has just debuted his new 90 minute show called Valier-Lirusión this past Saturday.  We talk about the show and their upcoming trip to Cartagena and we also tell them about our adventures in wine country. We adjourn to the Plaza de la Chueca for coffee and a few minutes later we are joined by Loreto Fajardo who is the female lead in Ramón’s new show.  Loreto has done a good bit of stage work and has appeared in a number of television series.  We chat for another half hour and then we each go our separate ways.

We hop a cab a little before 9:00 and head to La Taberna del Puerto  http://www.tabernapuerto.com/ where we are to have dinner with Juan Manuel Sampere, his wife, Carmen, and his two sons, Davíd and Eduardo. We spend the time catching up with each other while we dine on a number of dishes including grilled vegetables, shrimp, Serrano ham and a plate filled with a variety of fried fish and shellfish.  Both the food and the conversation are delightful.  We finish our meal; say our goodbyes and then Susan and I take a cab back to the hotel.

Today we spend the morning shopping. On our way to El Corte Inglés, we stop off at el Teatro Lope de Vega to buy our tickets for SPAMALOT, which we will see this evening.  We spend a goodly amount of time just walking and exploring.  We have a lunch date with another magician friend of ours, Rafael Benatar, who swings by and picks us up near the hotel.  We accompany him as a he does an errand and then we stop for lunch at a restaurant called Timbales, which is located a couple of blocks from the bullring.  We catch each other up on our activities.  Rafa is a unique combination of a musician and a magician.  He is a specialist on the lute and has played with a number of groups in a variety of countries.  He is also a professional magician.  Thursday he heads off to Los Angeles for a two week engagement at the Magic Castle in Hollywood. I met Rafa a number of years ago when we had lunch with another friend of mine, Rolando Santos.  Rafa also works as a translator of magic books and I have worked with him as a proofreader on several of his projects.  He drops us off at our hotel where we take a brief siesta and get ready for our evening of theater.

As the curtain rises, we note that the theater is only half full.  I suspicion that it has more to do with the perhaps somewhat limited appeal of Monty Python’s humor and the fact that the television series is not as well known here as it is in the States.  Here is a link that you might find interesting http://www.youtube.com/spamalotelmusical .  We spend a delightful two hours and laugh ourselves silly.  We are particularly impressed with the performance of the female lead, Dulcinea Juárez, who has appeared in a number of musicals on the Madrid stage.  Previously, she was the female lead in THE PRODUCERS.  In addition to being beautiful she has the most incredible voice.  She is one of the best that I have ever heard and that opinion comes from someone who has been a fan of Broadway shows for the past fifty two years.  On our way out, we buy the cast album and then walk back to our hotel ready to call it a night.

Today is my day to get beautiful.  I am at the magical point where the condition of my hair and beard is good, but in one or two days it will look wild.  I call up Cayetano, my Madrid barber and I make a 1:00 o’clock appointment with him.  We walk from our hotel to Narvaez Street where we stop off at City Gym, a small gym that is owned by a friend of mine, Carlos Flórez.  I met Carlos nine or ten years ago.  At the time, I was staying with a family near the gym.  Looking for a place to work out for the two weeks I would be in Madrid, I walked into City Gym and met Carlos.  It turns out that he had spent some time in California working out at Venice Beach.  We chatted for a while and I then did my work out.  When I finished I joined him in his office and inquired how much it would cost for me to work out there for the two weeks.  He replied that I could work out there for the next two weeks for free.  In the ensuing years, I have always worked out at City Gym when in Madrid and Carlos has come to California several times and we always catch up with each other at some restaurant in Pasadena.  When we walk in, he is there along with his wife, his daughter and his newest granddaughter.  We spend a good fifteen minutes catching up with each other and we learn that he and his son will be in California next August.  We say our goodbyes and I am off to meet with Cayetano while Susan goes in search of shoes.

The Spanish barber shop experience is unlike its American counterpart.  They do not use clippers, but rather cut your hair with scissors and a razor.  Additionally, one can still get a shave in a Spanish barber shop.  Most American barbershops have discontinued that practice, most probably for insurance reasons.  My hair is washed by Cayetano’s assistant.  I am the n led to the barber chair and Cayetano begins by trimming my hair.  Having finished that task he works on my beard.  He then tilts the barber chair backwards and covers my face with a hot towel to prepare and soften my beard for the shaving experience.  He covers my face with lather and with a straight razor he proceeds to even out my beard and remove my two day’s growth.  Susan, who has just returned from buying a pair of shoes and a pair of slippers, approves of the final result.

I pay Cayetano and we head off in search of lunch.  Our first choice, Bice, is totally filled and there is no possibility of a table.  We settle for El Museo de la Cerveza, which is a few doors down and we end up making our choices from the menu of the day with excellent results.  We take the metro back to the hotel and rest up for our dinner date with Enrique and Rosamari Tortajada.  Enrique is a recent magic friend whom I met at the Spanish National Magic Convention when it was held in Zaragoza.

They come by for us at 6:00 and it takes us more than an hour to cover the two mile distance from our hotel to their house.  As we approach the Plaza de Cibeles we discover that a protest has shut down four lanes of traffic.  When we pass that point, traffic frees up and we park and head up to their apartment where we have a most enjoyable dinner prepared by Enrique, who loves to cook, and at 10:30 he graciously drives us back to our hotel.

Susan will be visiting the XIX Century painting exhibit in the newly opened rooms of the Prado and I have decided to spend the morning visiting with my friends at the Estudio Internacional Sampere where I shmooze for a while and then set about updating my blog.  Susan and I have agreed to meet at 2:00 PM and have lunch at a restaurant we frequented rather often in the past.  It is called La Finca de Susana and we first learned about it from my friend and former colleague, Lee Stork.  The food is tasty and reasonably priced, but today the service is rather disjointed.  Susan gets her appetizer a full ten minutes before I get mine.  Susan’s entrée arrive fifteen minutes before mine.  We leave a bit dissatisfied and make our way back to the hotel to rest up and get ready for tonight’s theater experience.

We have bought tickets for UN DIOS SALVAJE Yasmina Reza’s newest play, which is currently running on Broadway as well.  Yasmina Reza is the author of ART, which we saw just before leaving LA.  The two female leads are starts of the Spanish cinema.  Aitana Sánchez Gijón and Maribel Verdú have distinguished themselves in a number of Spanish speaking films.  Of the two, Maribel Verdú is the better known for her performances in Y TU MAMA TAMBIEN, as well as PAN’S LABYRINTH.  The play focuses on two sets of parents whose boys have been involved in a fight at school.  The purpose of their meeting is to find an amicable solution to the problem.  The play quickly turns from amicable to hostile and the action that ensues is funny, but often times tinged with dark and ironic humor.  Here is a peek at the action, as well as an interview or two http://www.youtube.com/watch?v=m0yK9R8nmd4&hl=es

We leave the theater very pleased with our third evening of Madrid theater and we walk back to the hotel. We decide to do the majority of our packing, although our train to Valencia does not leave until 11:25 tomorrow morning.  Our packing is finished and so are we, so we call it an evening. 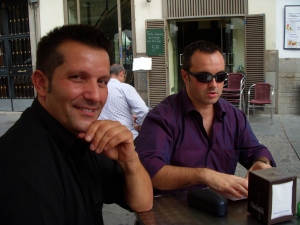 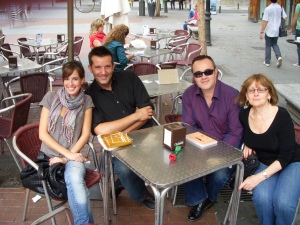 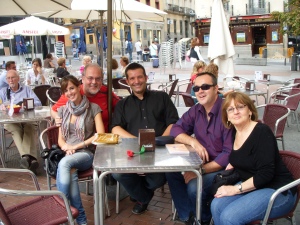 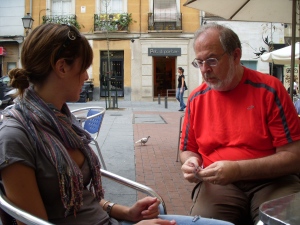 Caught in the act of making a napkin rose 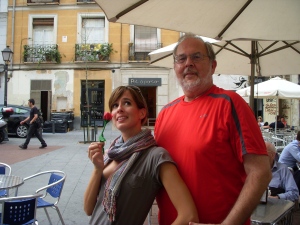 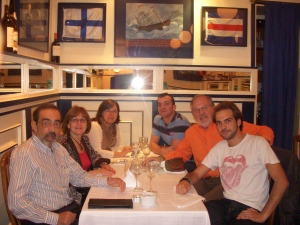 The Samperes and the Kaplans 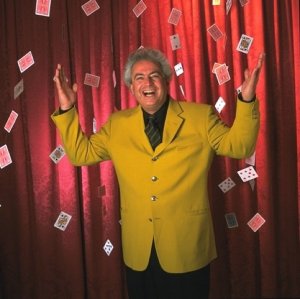