Posted on October 8, 2009 by martykaplan 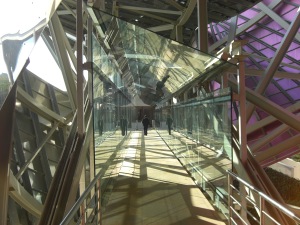 The bridge that connects the main building to the spa area.

Eight thirty comes all too early and we quickly shower and dress and are on the street at nine fifteen as promised.  We meet Antonio and Carmen and after a quick breakfast, consisting of a pincho de tortilla and coffee, we are back in the car heading to the small town of Briones, located in the Rioja Alta.  We drive past field after field of grapes and it is obvious that it is harvest time. We pass tractors laden with grapes all heading to their specific winery.  Familiar names fly by one after the other – Marques de Cáceres, Cuné – and in less than a half an hour we have reached our destination, the winery of Dinastía Vivanco and el Museo de Vino.

We are not going to tour the winery here.  Our goal is to visit the museum.  The building that houses the museum is absolutely beautiful.  It appears that no expense has been spared because they have used the finest wood, tiles, glass and fixtures to pay tribute to the cultivation of the vine and those who worship at that particular shrine.  Our guide is very knowledgeable and, as a result, I leave knowing more about wine than I ever did.

The making of wine dates back six thousand years to the times of the Egyptians.  The Egyptians would roll up the grapes in cloth and proceeded to twist the cloth – as one might a dish towel to wring it out – and the resulting liquid was then turned into wine.  It was the Greeks who invented the wine press and found a more expeditious way to get to the liquid results.  It was left to the Romans to add the concept of a screw mechanism to the press so that the maximum amount of liquid could be extracted from the grapes.  We see a number of presses during our tour and learn about the various ways in which wines were historically transported.  We also learn about the process of how wine barrels are made.  These days the preference is for American oak rather than French oak.  We end our tour looking at an exhibit of some three thousand different corkscrews.  There are another thousand stored away and that makes this collection of corkscrews the worlds largest.  No photos are permitted during the tour and that is a shame.

After the tour is over, we visit the gardens nearby and shoot a few photos. Then it is back in the car and we are off to the small town of El Ciego where the Marqués de Riscal Winery is located, as well as its Frank Gehry designed hotel.  Some twenty five minutes later the unmistakable curves and colors that have come to be associated with Gehry come into view.  The first impression is simply breathtaking.

Designed by Frank O. Gehry, the complex was officially inaugurated by King Juan Carlos on October 10, 2006. “The City of Wine is Marqués de Riscal’s innovation for the new millennium – a luxurious cultural wine destination on its main estate in El Ciego, Rioja. It was designed to offer visitors a uniquely interactive way to experience their wines through a “feast of the senses.” Deemed a “21st century château,” its nexus is the century-old wine cellar, the foundation of which was laid in 1858, and later extended in 1883. $77 million dollars was invested in the 10 year project which also focused on modernization of the winery facilities, including the building of a new vinification area and an increase in vineyard holdings.”

The hotel has a total of 43 rooms 15 of which are housed in the main building and the remaining rooms are located across a footbridge that leads to the spa area.   Through divine intervention or for some inexplicable reason, we were given what I consider to be the two best rooms in the main area of hotel.  If you have seen the photos that both Susan and I have posted on Facebook, most of the shots of the exterior were taken from our room.  The room was marvelously appointed.  The bathroom area consisted of a separate vanity equipped with the most luxurious brands of personal products.  Beyond the vanity were a full sized tub on your left and a full size shower on your right.  The WC was located beyond that.  Both Susan and I were provided with a luxurious robe and slippers.  The television set was one of Bang-Olafsson’s best; the CD MP3 player was one of Grundig’s top of the line.  No detail was lacking.  We unpacked and took a moment to refresh ourselves because it was an uncharacteristically warm day with the temperature flirting with the 90’s.  We had a three o’clock reservation at the hotel’s restaurant and we took the elevator to the second floor.

The kitchen is under the direction of José Ramón Piñeiro with a menu designed by Francis Paniego of Echaurren and El Portal fame. Ramón worked with Francis for ten years before assuming his current position at the hotel. We all sampled the tasting menu which featured the best that Spain has to offer.  There was a series of six dishes each more amazing than the previous one.  We sampled the lightest croqueta de jamón that I have ever sampled in my thirty five year love affair with Spain, we followed that with a concassé of tomatoes, a soup of ajo blanco crowned with a warm shrimp, an exquisite piece of hake fish, albóndigas de la abuelas, which translates as grandma’s meatballs, but your granny never made one like this complete with slices of black truffle.  Dessert was a delicious creation of puff pastry, apples, and caramel topped with a scoop of homemade ice cream.  We chose a 2003 Barón de Chirel to accompany the meal. Heaven!  We finished the meal with coffee and then heade doff for our tour of the Marqués de Riscal winery.  I will talk about that visit in my next blog entry. 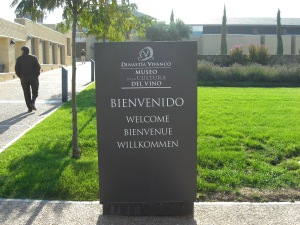 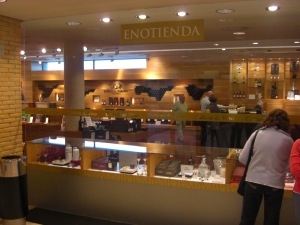 Light fixture in the shape of grapes 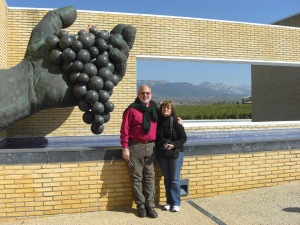 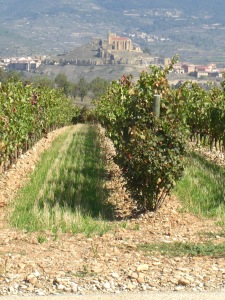 The hotel at Marqués de Riscal

A view from Room 7