We started our day yesterday with fresh baked croissants.  There is something wonderful about having a bakery 200 feet away from your front door.  After breakfast we headed out to the Central Market to replenish our supply of fruits and vegetables.  Afterwards we found a nearby shop that specialized in kitchen items and bought ourselves a carving knife and an oven mitt.  We finished off our little morning adventure with a café cortado and we headed back home.  Now that we know the direct route to the market, it takes less than five minutes to get there.

We had lunch at home.  Susan had purchased some asparagus and some oranges and so she put together this wonderful dish that comes from the URBAN ITALIAN cookbook.  It is easy to put together and it takes all of two minutes in the microwave to make it table ready.  We had purchased some croquetas and empanadas on Sunday so we warmed those up.  We sliced a fresh tomato, cut up a loaf of bread and unwrapped the salchichón (think salami) we had purchased earlier in the day.  To accompany the meal I opened a bottle of  Martín Códax, a nice, crisp Albariño with the aroma of herbs and apples.  It is one of the best that you can buy.  That was the opinion of a recent article on  Albariño wines in a recent LA Times article.  If you want more information about this particular wine, here is a link – http://www.martincodax.com/

After lunch Susan headed to a nearby park to read her book and I fired up the computer and worked on yesterday’s blog entry.  We met up around 6:00mand shared a Diet Coke and, afterward, we headed home to get ready for our evening visit to a local jazz club.

We met up with Sara in front of the Central Market and from there made our way further into El Barrio de Carmen.  Our destination was a small club called Jimmy Glass Jazz Bar.  It has been around since 1991 and, true of jazz clubs in general, it is located in a seamier part of town.  The club can hold about eighty customers with most of them seated, but there are those who prefer to stand closer to the bar.  The club is dark and smoke fills the air because smoking has yet to be banned in Spanish restaurants and bars.  We were seated off to the side and towards the back and the breeze from the fans at the front of the establishment never quite reached us.  There were five of us all together when the first set began.  Pepe arrived late because he was putting together the final touches for a chess exhibition taking place on Wednesday.  It is a rematch between Garry Kasparov and Anatoly Karpov. You can find the details here: http://www.huffingtonpost.com/2009/09/22/kasparov-karpov-chess-mat_n_294503.html

At 9:50 the first set began and we all settled back in our chairs.

The group we were listening to was the María Neckam Quartet.  María was born in Austria and currently resides in Brooklyn.  She has a style that is somewhat reminiscent of Bjork, but for Susan and me, she reminded us a bit of Annie Ross.  The three musicians backing her up were outstanding and the fact that the pianist was a last minute replacement made his playing all the more amazing. María’s voice was pitch perfect and pleasing, but there was a sameness to her repertoire.  She always seemed to be on top of the music, rather than emotionally involved in it.  Here is a link to her myspace page and you can make your own decision. http://www.myspace.com/marianeckam In between sets we had another beer and we all had a bocadillo of ham and tortilla española.  The second set ended at midnight and as we made our way back home it started to sprinkle.  No sooner had we opened the door to our apartment when the skies opened up and it began to pour.  Wednesday promises to be a showery day.

The Maria Neckam Quartet in action 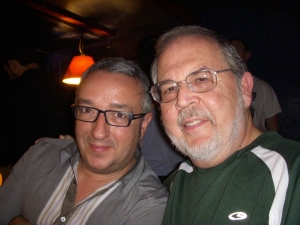